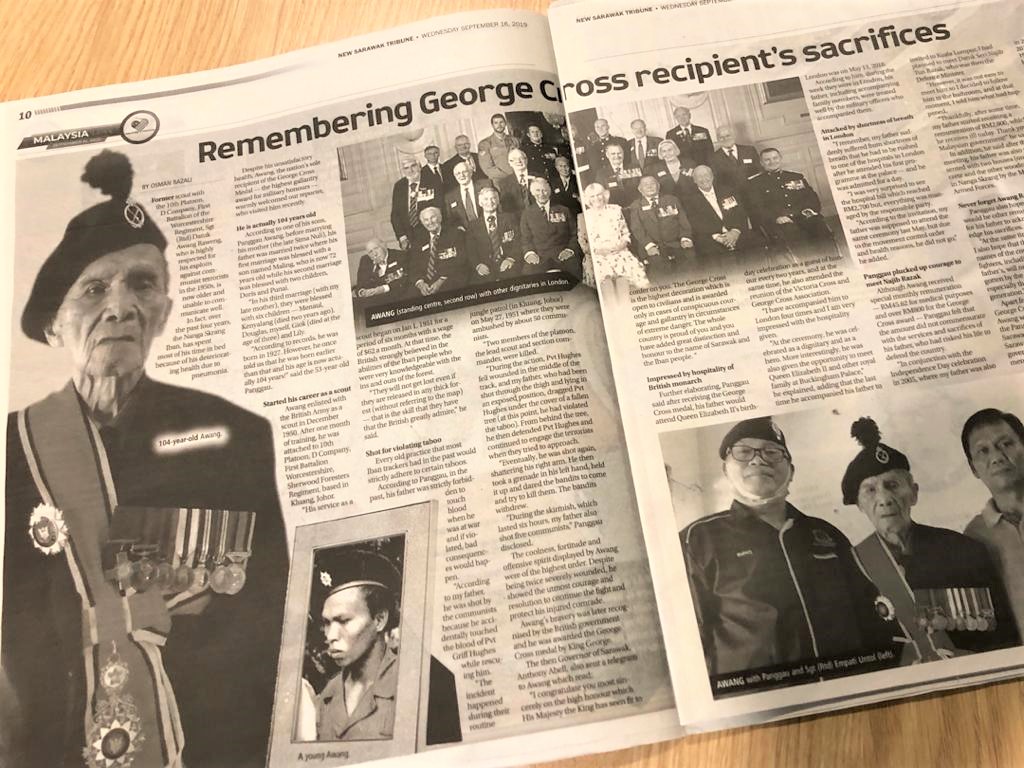 PASSING OF A HERO

KUCHING: The nation’s sole recipient of the George Cross medal, Datuk Dr Awang Raweng, has passed away at his son’s residence in Sri Aman around 2.15pm today (Sept 18).

He was 91 years old at the time of his death.

According to a statement issued by the family, the body of the deceased would be at his son’s house at No.4, Lorong 1, Taman Padri, Sri Aman until today (Sept 19).

“On Sept 20, we will bring the body to Kuching Civic Centre at 10am for the final tribute ceremony.

“On Sept 21, the body of the deceased will be prayed over at St Thomas’ Church Kuching before being buried at the Heroes Cemetery (Heroes Memorial) Taman Budaya, Kuching,” it said.

“The arrangements in Sri Aman will be managed by Persatuan Veteran Tentera Kor Renger (PVTKR) president Lt Col (B) Tn Mohd Melintang B Abdullah and assisted by Markas 1 Division, Sri Aman Resident and District Office as well as Simanggang Service Centre,” it added.

Layar assemblyman Gerald Rentap Jabu described Awang as an Iban warrior who had made a lot of sacrifices to defend the country.

“We as the next generation should appreciate his sacrifices and struggle in fighting the communists.

“All the developments that we have and enjoy today are due to the sacrifices of the earlier leaders like Awang,” he said when contacted today (Sept 18).

Only recently, Awang was visited by Suara Sarawak reporter Osman Razali who found out that the old man spent most of his time in bed because of his deteriorating health due to pneumonia. However, this was not confirmed to be the cause of death.

Awang was a former scout with the 10th Platoon, D Company, First Battalion of the Worcestershire Regiment. He was highly respected for his exploits against communist terrorists in 1951.

Awang was awarded the George Cross — the second-highest award in the United Kingdom’s honors system after the Victoria Cross — on Nov 20, 1951.

He was also conferred an honorary master’s degree in education strategy by Universiti Pertahanan Nasional Malaysia in 2015.

Ever ready to assist