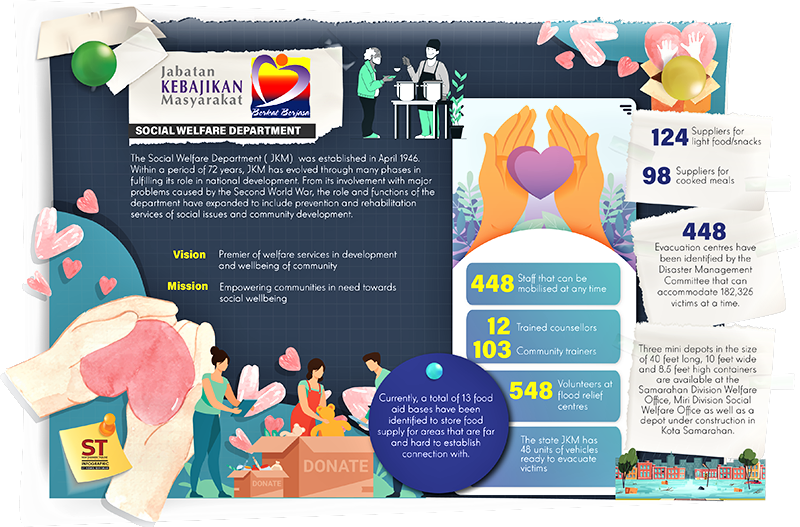 Among the areas involved are Kuching (two forward bases), Miri (seven), Bintulu (three) as well as Kapit (one).

“To date, the state Welfare Department (JKM) has 448 staff, 12 trained counsellors, 103 community trainees and 548 volunteers who will be housed at evacuation centres to assist the victims.

“Apart from that, we have also identified 124 dried food suppliers and 98 caterers who will provide cooked food to the flood victims.

“In terms of assets, we have 48 vehicles that will be used for the purpose of evacuating victims,” she told our reporter on Monday (Jan 11).

Further elaborating, Fatimah said that the Divisional Disaster Management Committee has also identified three mini depots (to store disaster-related items on a large scale) as well as 584 evacuation centres across the state which can accommodate 182,325 victims at a time.

Meanwhile, speaking on assistance, Fatimah said JKM would provide food supplies at the forward bases as well as in areas where the victims were not evacuated.

“Victims at evacuation centres will be distributed with packed cooked food or rationing of raw materials, kitchen utensils and other basic necessities,” she added.

For the record, JKM has channelled assistance amounting to RM5,489,277.85 to victims of fires, landslides, storms, floods, and droughts throughout Sarawak from January to December last year.