Home Lifestyle Give the man the mic 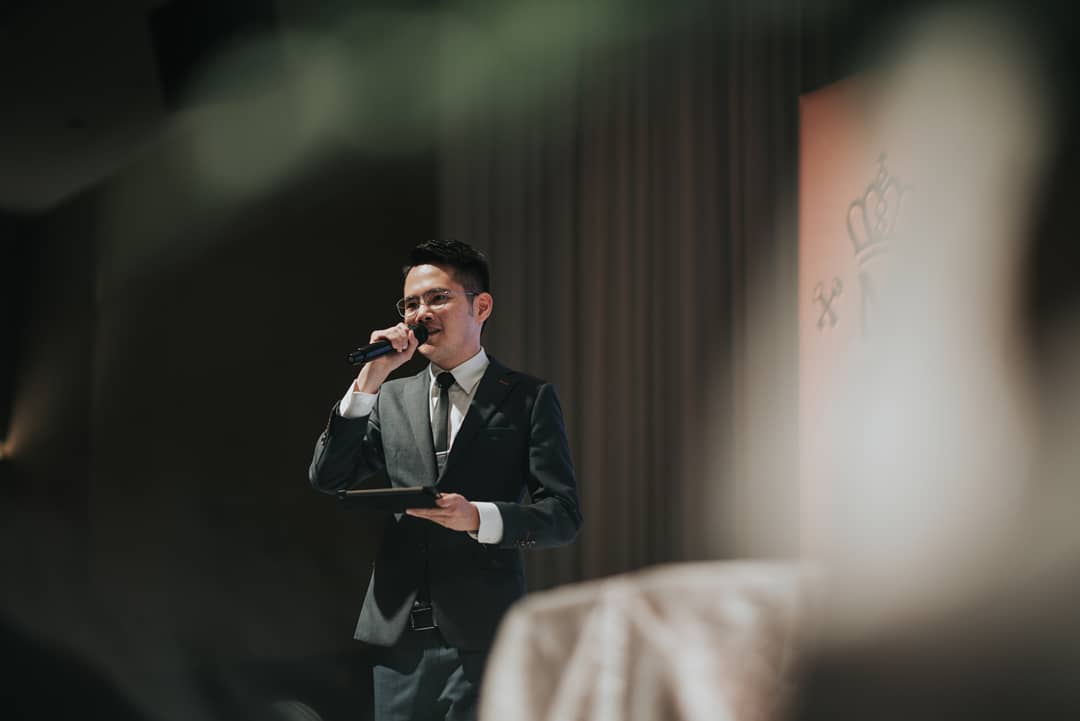 Speaking in public can be nerve-racking. Emcee Anthony Voon, on the other hand, enjoys being on stage and talking.

The man on stage

An emcee is an important person at events. It is his/her responsibility to make sure the front appears presentable even though things can get messy behind the scenes. For emcee Anthony Voon, despite the pressure he is under in the back of his mind, he maintains a cheery front.

Voon, a professional master of ceremonies based in Kuching, Sarawak, has been hosting events for over a decade. The desire to speak in front of an audience first emerged in secondary school, where he often served as the host of the assembly every week as a prefect.

“It was great to be able to speak on stage. After that, I volunteered with a friend to emcee the youth events at my church. I thought about how cool it was and how much he had taught me.”

He moved on from church events to national conferences.

At the recommendation of a friend, Voon had his first experience of hosting a wedding when he was 21 years old. He can still clearly recall how he had no idea how to emcee a wedding.

“I didn’t know how to speak, what to say, or what the dress code was back then. I just wore jeans and a polo t-shirt. I carried my script with me, but when I got there, I saw that no one was guarding the PA system, so I had to do it.”

There, he was holding a script in one hand while playing music with the other. It was an interesting experience.

Today, he no longer uses scripts to emcee events and often wears tuxedos. According to him, holding a script makes an event monotonous.
“Instead, I will prepare pointers for each and every event. For example, on my card, it will say ‘wedding cake cutting ceremony’. That’s it. So I’ll know what the programme is, and then I’ll say what I should say based on the vibe.”

“What I usually tell clients is that as long as the event requires someone to make noise professionally, I’ll do it.”

However, the emcee that audiences will see is determined by the events they attend. Further elaborating, Voon said that at weddings, he will appear grander and more sophisticated while maintaining a romantic atmosphere.

“On the other hand, formality is required at sporting events. You will also need to hype up the event. The same goes for roadshows,” he added.

But he did admit to having performed a wedding ceremony in the Hakka dialect, which is a branch of Chinese dialects.

“The dialect is informal and it can sound like you are scolding someone. But I had to formalise it for the wedding. Many people were surprised and laughed because formal Hakka is not typically heard.”

The challenges of being an emcee

To him, the challenges of being an emcee come off stage. As the host, Voon is responsible for making sure everything runs smoothly.

“So, I’ll need to coordinate. It is easier to manage in familiar settings, such as familiar hotels with familiar teams. But every time we have a new team, I am unfamiliar with how the other individual performs or works as a team. I therefore will need to establish communication and guarantee that everything goes properly,” he said.

When asked if he had stage fear, the outgoing man said no.
“But pre-event anxiety, definitely … especially if you’re hosting a wedding, which is one of the most significant events in a person’s life. There is anxiety, but there are ways to deal with it. I’ll change it into excitement.”

Voon said that the feelings of anxiety and excitement are the same.

“Our heart starts to beat very quickly and we get jitters. So, instead of feeling anxious and nervous, I’ll tell myself that I’m excited about the coming events.”

Voon also realises that psychology plays a role in being an emcee. All aspects of hosting on stage that he considers include how he presents, how he speaks, and what vocabulary he should use.

“I often tell my clients that they don’t hire me only to talk. Rather, they engage me for the sake of creating and sustaining the vibe.”

How does he accomplish that? Voon said that he will usually meet up with the couple and get to know them as well as the crowd.

“Connection is important. This is why I don’t use scripts; I need to assess the crowd and the people and act accordingly.”

Nonetheless, his time at an event usually runs smoothly, except when he gets a cough and a sore throat. As an emcee, his voice matters. Because time is uncertain and anything can happen, Voon takes good care of himself and his voice when an event is approaching.

Voon also said that he always stays hydrated and never shouts when hosting.

“I can heighten the atmosphere with my voice, but not to the point of shouting, as this could damage my vocal chords.”

Voon recalled two instances in which he nearly lost his voice.

“If I’m not careful, my voice will break. The only thing I did during the event was lower my voice and make it seem deeper so it wouldn’t crack. And when it came to the ‘Yam Seng’ moment that night, I was grateful that the live band vocalist assisted me in shouting it out.”

Another occurrence was when he had a persistent cough. Voon recalled that night’s unsatisfactory performance on stage and mentioned how he had to speak more quickly. Then he’ll stop and cough discreetly.

“Even though I felt bad, the client later messaged me to thank me for my performance and to let me know that many people had also enjoyed my hosting.”

With a decade under his belt and likely more to come, Voon does not intend to retire from the stage. Because he loves speaking professionally, he hopes to be able to celebrate with many people on their special day.