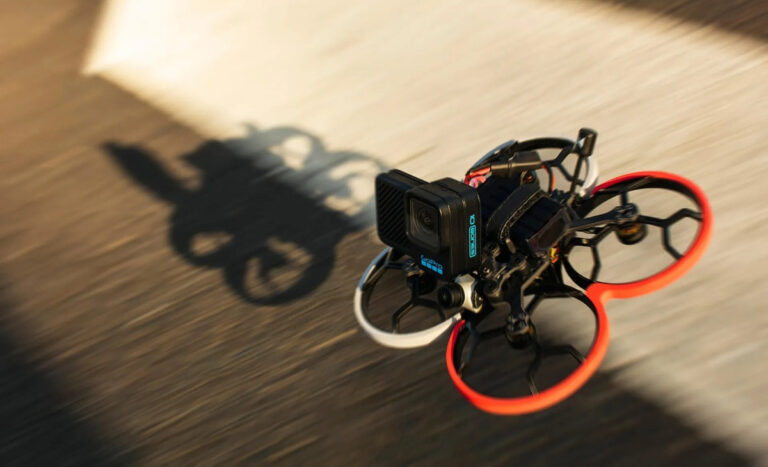 GoPro has unveiled a lightweight version of its current generation flagship action camera, known as the Hero 10 Black Bones. Weighing at only 54 grams, 100 grams less than the original model, the device is specially designed to be mounted on FPV drones.

The Hero10 Black Bones’ light weight is attributed to the removal of the internal battery, whereby it relies on the attached drone’s 2S-6S or 5-27V battery instead. GoPro says the action camera comes with a well-ventilated, semi-durable housing that promotes continuous airflow cooling for long captures or flights. Additionally, it also retains the original’s replaceable cover lens that can be swapped for third-party ND filters and so on.

The specifications and features of the newer variant remains the same as the base model, including the GP2 processor and a 23.6MP sensor that is capable of recording 5.3K videos at 60 fps, 4K at 120 fps, and 2.7K at 240 fps in 16:9 mode. Of course, also onboard the Hero10 Black Bones is GoPro’s HyperSmooth 4.0 image stabilisation feature to remove the bumps and shakes when recording footage, especially via zippier FPV drones and the likes.

Controlling the action camera is done via a pair of physical buttons, Quik App, GoPro Labs QR Codes, GoPro’s The Remote accessory, or a drone’s own transmitter. Also included in the package is a single screw boss for its drone mount, a standard FPV connector, and an optional adapter for the GoPro mounting ecosystem.

The new Hero10 Black Bones is currently available exclusively via the GoPro’s official website, with no plans for retail availability just yet. It is sold on the website for RM2,115, or RM1,692 for GoPro subscribers.