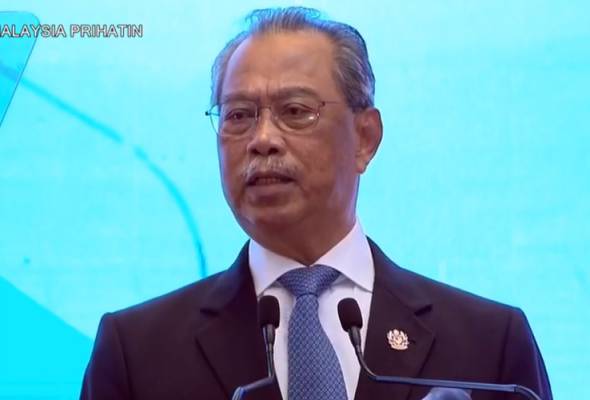 PUTRAJAYA: The government formulates strategies to control the spread of Covid-19 based on data, as well as taking on a more targeted approach by implementing a stricter movement control order at the location of the cluster infection, said Prime Minister Tan Sri Muhyiddin Yassin.

Economic activities, he said, would continue to open, but subject to strict compliance with the standard operating procedures (SOP), including observing social distancing.

“Enforcement of the SOP will be enhanced. Stern action will be taken against those who defy the SOP to ensure economic activities and livelihood of the majority of people and businesses can remain open,” he said in his One-Year Malaysia Prihatin Keynote Address today.

The event, held in conjunction with his first year in office, took place in a hybrid manner that combined the physical and virtual presence of the cabinet ministers and Chief Secretary to the Government Tan Sri Mohd Zuki Ali.

The prime minister said although economic activities had been opened, movement control was still needed, including for international and inter-state travel, as well as social and business activities where social distancing could not be practised.

“The opening of such activities can only be done after the implementation of the immunisation programme reaches a certain level in terms of people’s coverage,” he explained.

Muhyiddin said the government was also formulating several additional measures, such as providing targeted assistance to vulnerable groups, especially the poor and those who had lost their income.

The government is also taking steps to increase support for businesses, especially businesses that are still unable to operate and those that are in the process of reopening, he added.

He said the public delivery system was also being given focus, especially to ensure the aid reached the needy, expedite implementation of development projects, as well as reduce bureaucracy so that economic activities could be resumed and encouraged new investments, locally and from abroad.

Muhyiddin said the digitisation agenda was also being focused in line with the growth of new sources of wealth and the transformation of the country’s economy in activities based on knowledge and innovation.

In the effort to curb the spread of Covid-19 and ensure the safety of the people, the Prime Minister said the government had also intensified border control, ascertained compliance with regulations on the movement control order, improved existing detention centres, as well as opened several temporary detention centres and tightened control on foreigners entering the country.

He said the government would not compromise on the issue of illegal immigrants, especially in an effort to curb the spread of Covid-19.

The government, he added, would continue to implement security and enforcement controls, especially during enforcement of the movement control order (MCO), while policies and laws relating to security would be enhanced to further strengthen the enforcement aspect.

Muhyiddin said border control would be among the government’s focus through the transformation of management and governance.

The prime minister said the Covid-19 pandemic had taught the country the importance of having the best health system.

The Covid-19 pandemic had exposed the gaps in the existing system, as well as the need for short- and long-term measures to be taken to ensure that it does not put extreme pressure on the country’s health system in the future.

Recognising the facts, he said, the government has embarked on a comprehensive study on the country’s health system with the study divided into two phases, encompassing projections and efforts that need to be taken for the period until 2030.

The ongoing first phase would examine the country’s health system objectively and set out the main step that needs to be taken to strengthen the existing system, he said, adding that the second phase will focus on an action plan that would detail the steps that need to be taken to achieve the objective of creating a sustainable health system.

“Whatever achievements made by the country over the past one year and the coming years are done by all of you,” he said and gave the assurance that the Perikatan Nasional government will continue to care for the people.

While expressing his appreciation to the frontliners who had been working tirelessly in protecting the people against the disease, the prime minister also called on the people to register for the Covid-19 vaccination through the MySejahtera application.

Muhyiddin, who received the first dose of the vaccine on Feb 24 said: “Alhamdulillah, I am healthy and can work as usual. The vaccine is safe for me and InsyaAllah, it is safe for all of you.” – Bernama

Pregnant women should be vaccinated after delivery before being discharged

Phase one of National Recovery Plan to be extended