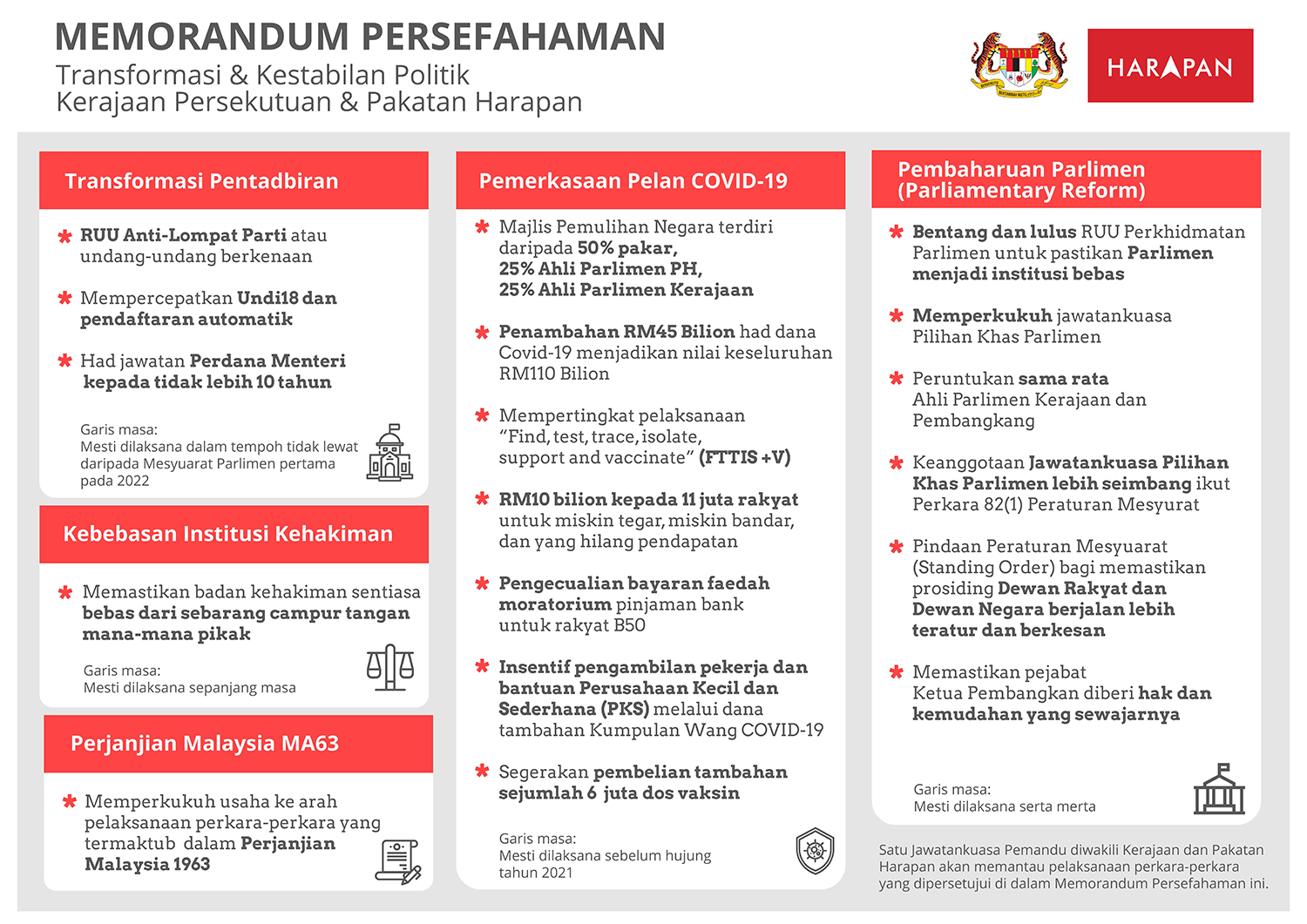 KUALA LUMPUR: The Memorandum of Understanding (MOU) on Political Stability and Transformation which was signed by the government and Pakatan Harapan (PH) is effective from yesterday and applicable until the 14th Parliament is dissolved.

A copy of the 17-page MOU, which was uploaded on the Parliament’s website today, also stated that the government agreed not to dissolve the Parliament before July 31, 2022.

According to the MOU, the government must do its best to implement each and every transformation proposed and within the timeline agreed upon by both parties.

The MOU also stated that PH had agreed to support or abstain from voting for Budget 2022 and the supply or finance laws related to Budget 2022 while the process of drafting the Bill be negotiated and mutually agreed upon.

PH also agreed to support or abstain in the process of approving any government motion, other Bills, and failure to pass them would be a form of distrust or loss of confidence in the government once the Bill drafting process has been negotiated and agreed upon.

However, the PH agreement is subject to fulfilment and implementation of the transformation within the agreed time frame.

The MOU, which has been agreed to be non-confidential and made public as a commitment to openness and accountability, also clarified that failure to fulfill and implement any transformation would be a breach and could result in the agreement being terminated.

The MOU is also governed by and interpreted in accordance with Malaysian law.

Both parties agreed that the MOU would not affect the role, rights and responsibilities of PH in carrying out check and balance, monitoring, scrutinising and ensuring the government is accountable to Parliament, including ensuring transparency, integrity and effectiveness of the government in handling the people’s issues.

The six-point MOU, a form of bipartisan cooperation which upholds the spirit of the Malaysian Family, covers the areas of strengthening the plan to fight Covid-19, the transformation of the administration, Parliamentary reforms, ensuring judicial independence, the Malaysia Agreement 1963 (MA63) and formation of a steering committee.

Under the agenda to strengthen plans to fight Covid-19, it was agreed that the National Recovery Council should comprise 50 per cent of public and private sector experts appointed by the government as advisors, with the opposition also able to submit names.

Both parties also agreed to continue to provide cash aid to those in the B40 and M40 groups next year, speed up the purchase of an additional six million doses of vaccines for the National Covid-19 Immunisation Programme, work on the exemption from interest payments for recipients of bank loan moratoriums for a period of three months in the fourth quarter of this year.

On Parliamentary reforms, both parties agreed that the Parliamentary Service law be tabled and approved after discussions, engagement and agreement of the Speakers of both houses.

Under the judicial independence agenda, both parties agreed to ensure that the independence of the judiciary, institutional transformation and good governance are implemented at all times while for the Malaysia Agreement (MA63) agenda, the government and PH agreed to strengthen efforts towards the implementation of matters enshrined in the MA63 agreement and related documents.

Under the formation of a steering committee agenda, it was agreed that its establishment would comprise 10 individuals, with five representatives each from the government and the opposition and the committee should meet once every two weeks or according to a schedule agreed by both parties.

Previous article24 new localities placed under EMCO
Next articleAre we prepared to live with Covid-19?