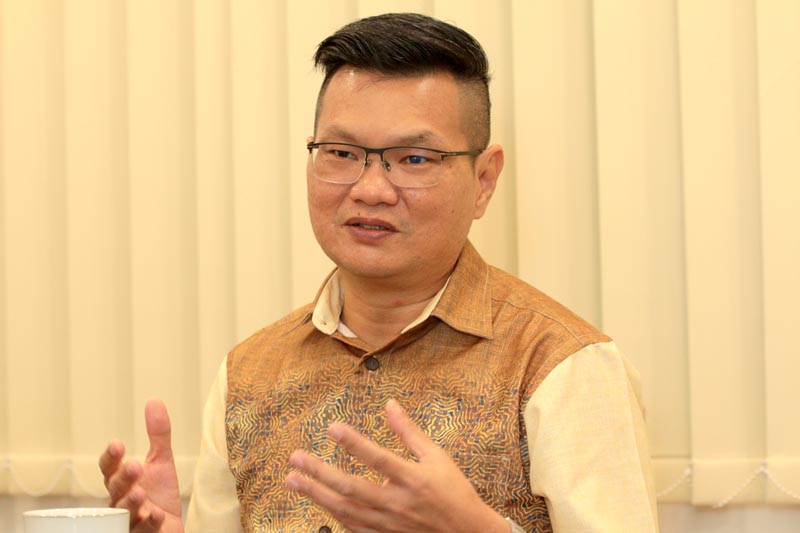 Will Gabungan Parti Sarawak (GPS) as the ruling state coalition government play the role of ‘kingmaker’ again in the 15th general election (GE15)?

Political analyst Dr Lee Kuok Tiung provides his analysis and thoughts on the upcoming GE15 when he sat down with New Sarawak Tribune and its sister paper Suara Sarawak recently.

Below is the full transcript of the question-and-answer session:

When do you think the 15th general election is going to happen?

In my opinion, GE15 will be done during important dates. In the current political situation, the coalition government has yet to draw out the budget. GE15 and dissolution can happen any time, on top of the fact that their term will be up by next year. I would not be able to predict the exact date that it will happen but it will happen anytime from now.

I believe all parties, whether it be Barisan Nasional (BN), Perikatan Nasional (PN) or Pakatan Harapan (PH) are ready to face the election. In West Malaysia, I believe it will evenly spread between these three coalitions so once again when they want to form the government, Gabungan Parti Sarawak (GPS) will play the role as the ‘kingmaker’ again.

Is GPS going to be the ‘kingmaker’?

I am very confident that GPS will be the ‘kingmaker’ because based on the number of seats in West Malaysia, I think it is more or less pretty even. I once saw a talk show dialogue that threw the idea of UMNO merging with PH. The reason they gave on the talk show was that PH can win a majority of it but if we actually follow the statistics, there would not be a clear winner so we need to form a mixed government again. BN actually won 89 seats in 2018 if I am not mistaken. Nineteen from Sarawak, and part of the seats won were contribution from Sabah and Sarawak.

Now that Sarawak has GPS, they should understand how to form a government. Gabungan Rakyat Sabah (GRS) wanted to know what the name of the model was but it did not work. When the Chief Minister of Sabah, Datuk Seri Hajiji Noor visited Sarawak Premier Datuk Patinggi Tan Sri Abang Johari Tun Openg during the Chinese New Year’s eve and had a talk with the Premier during his visit. Based on my observation, Hajiji went back to register GRS after that.

Politics are two-way streets. I am sure of a mutual agreement between PN chairman Tan Sri Muhyiddin Yassin and  Abang Johari as GPS chairman back then when Abang Johari decided to provide his support.

How well do you think GPS, BN, PH and GRS have prepared?

In terms of readiness, I believe United Malay National Organisation (UMNO) is the most prepared and ready for the general election. They are doing a lot of work to face the upcoming election. But in terms of Sarawak, I believe GPS is the most prepared. Based on my perspective, Sarawak United People’s Party (SUPP) have yet to disband the election machinery after the Sarawak election last year so I believe they are prepared. Meanwhile, there are a lot of internal problems in other parties. In terms of Sabah, I believe it is Parti Warisan.

The opposition party does not seem united and what do you think the effect is going to be for them?

It is certain that if they are divided, they would not be as strong as they were. As we have seen in the last election that one of the contributing factors to GPS’ landslide victory was the fact that the opposition parties were divided. Using the five out of the 13 seats that SUPP won previously as example, if you actually add up all the votes for the multiple oppositions, the number is actually bigger than SUPP had received.

In my opinion, the game changers for the upcoming GE15 are the first-time voters, between the age of 18 and 20. Automatic registration has helped to increase the legitimate voters to 5.8 million people in Malaysia. However, out of those 5.8 million, I believe probably a maximum of 27 per cent are those aged between 18 and 20.

How much do you think people understand about politics?

What are the challenges for PH this time around?

PH, in my opinion, it depends on the parties within the coalition. For example, in Parti Keadilan Rakyat (PKR), maybe it is the leadership. PKR has just gone through its own party elections. Rafizi Ramli made a comeback as the deputy president. Recently, we have also heard of the term ‘big tent’, which is up for everyone on how to interpret the term. Does that show that PKR is getting more divided or PKR is recovering after Rafizi became the deputy president? That is the context of PKR right now in terms of West Malaysia.

In the context in Sarawak, in my opinion See Chee How is better known as a PKR leader previously. In my opinion, when he left Parti Sarawak Bersatu (PSB), he was actually looking for a political platform to continue his political career. In terms of political ideology, he would not last long since he just left PSB.

In Sabah, there is also leadership problem there. I think among the PH coalition, Democratic Action Party (DAP) is the one that seems to be more consistent. We do not see anything happen to them like that from PKR, the “Sheraton Move”, who want to leave PKR.

What is your comment towards BN’s decision to go solo in the upcoming GE15?

Personally, I think BN was actually the biggest party compared to PH, led by Datuk Seri Anwar Ibrahim. He tried to bring the concept of BN which is to combine the opposition parties, previously first seen in Barisan Alternatif, followed by Pakatan Rakyat and then PH.

In the case of PN, even though there is unity in Sarawak, if we take the case of Datuk Willie Mongin as an example, who recently entered Parti Pesaka Bumiputera Bersatu (PBB). That is to me an indicator that BN is not competitive in Sarawak. After the GE15 and when it is time to form a government, he will approach GPS to cooperate with them.

What is the issue that the political parties are using this time specifically in Sabah and Sarawak?

For the opposition, they will pick on the issue of integrity and accountability. The hottest issue right now is the littoral combat ship (LCS) warship. Personally, I feel the aura of PH with social media seems to have collapsed a little. Here I see that there are two factors contributing to the issue, one is in terms of media literacy among the majority of the people in Malaysia. There has been a slight increase in terms of media literacy. Second being the fact that in GE14 when PH raised all of the issues back then, BN was so unbalanced so it tilted towards PH’s favour. There were no social media influencers back then for BN.