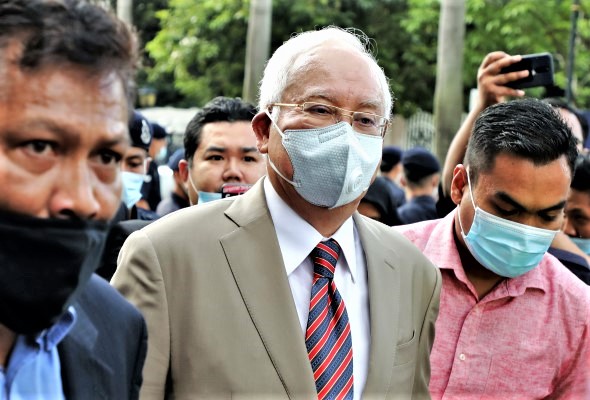 Najib found guilty on all seven charges in SRC trial

High Court Judge Mohd Nazlan Mohd Ghazali delivered the judgement after finding that the prosecution had succeeded in proving all seven charges against Najib, 67.

“I therefore find the accused guilty and convict the accused on all seven charges,” the judge said.

On the third count, Najib allegedly misappropriated RM10 million of RM4 billion belonging to SRC at the same place between Feb 10, 2015, and March 2, 2015.

On the abuse of position charge, Najib, as Prime Minister and Minister of Finance of Malaysia, allegedly used his position to commit bribery involving RM42 million through his participation or involvement in the decision to provide government guarantees for loans from the Retirement Fund Incorporated to SRC International amounting to RM4 billion.

On the money-laundering charges, Najib is alleged to have received RM27 million, RM5 million and RM10 million, respectively, of proceeds from unlawful activities, via Real-Time Electronic Transfer of Funds and Securities (Rentas) into two of his AmIslamic Bank Berhad accounts.

The offences were allegedly committed at AmIslamic Bank Berhad, AmBank Group Building, No. 55, Jalan Raja Chulan, Kuala Lumpur, between Dec 26, 2014, and Feb 10, 2015 under Section 4(1)(b) of the Anti-Money Laundering, Anti-Terrorism Financing and Proceeds of Unlawful Activities Act (AMLATFPUAA) 2001.