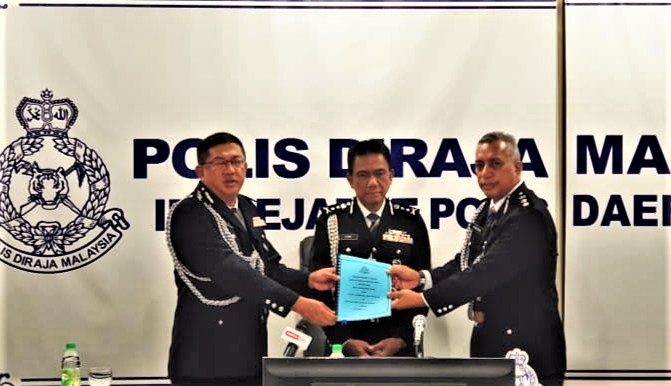 He took over the duties from outgoing police chief ACP Lim Meng Seah, 54, who held the post for three years and seven months.

Fisol, in his speech, congratulated Hakemal, who is former Sarawak General Operations Force (GOF) deputy commander, for his new post.

“I am confident that he will carry out his duties well and I urge that all police personnel in Miri to continue giving the same cooperation and support to their new police chief.

Fisol also wished Lim well for his new post in the Bukit Aman Forensic Department and thanked him for all the achievements during his term as the Miri police chief.

Meanwhile, Hakemal thanked Lim for leading Miri IPD well with the support from everyone in the headquarters.

“I hope for the same cooperation and support as given to Lim. We can try to improve our efforts from time to time for the good of the people.

“I also extend my thanks to the PDRM’s leadership for the confidence and trust in me to lead Miri IPD and I hope I can do my best to maintain the performance in the headquarters,” he said.

Lim expressed his gratitude to the district’s department and police station chiefs as well as all police personnel for their undivided support and cooperation throughout his time as the police chief.

“I also want to advise everyone in the force to continue with your noble efforts so that we can improve the image and integrity of PDRM in the future as well as changing the public’s perception of the police to a positive direction.

“Apart from that, I want to extend my apologies to everyone if any act or words of mine have offended you. Such act and words are for the benefit of the task while performing and not for personal gain,” he said.