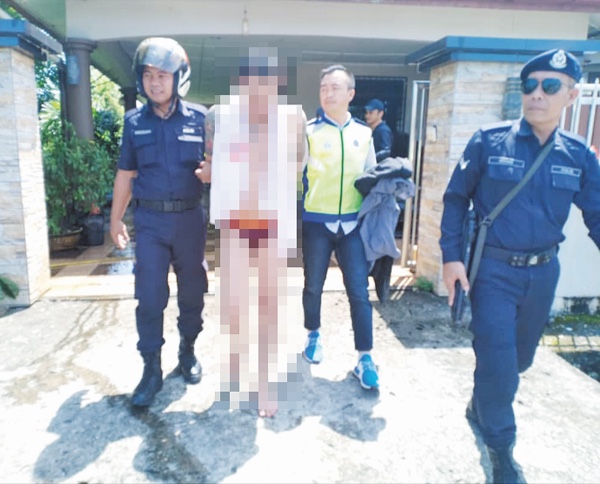 Police arresting the suspect from his home.

SIBU: A 28-year-old half-naked man believed to be high on drugs was arrested when he caused public nuisance yesterday.

Police grabbed the man who was armed with a knife and challenging motorists to a fight in Jalan Merlin here.

A one-minute-49-second video of the man stopping vehicles at 12.33pm had gone viral.

A screen grab of the video showed the man in only his underwear, banging on any vehicle that he stopped.

With a knife in his hand, he challenged them to a fight.

Sibu OCPD ACP Stanley Jonathan Ringgit said the police rushed to the scene after one of the victims, a contractor, called up for help.

“The 26-year-old contractor suffered a RM700 loss after his car bonnet was dented as a result of the hard banging by the suspect,” he said.

ACP Stanley added that when a police team arrived at the suspect’s house at Belian Lane, which is near Merlin Lane, he quickly threw the knife into a drain.

“Our initial investigation showed that the suspect had an overdose of ganja,” he said, adding that police would seek for his remand.

The case is being investigated under Section 6(1) of Corrosive and Explosive Substances and Offensive Weapons Act Section 437 of the Penal Code for causing mischief thereby causing damages to properties.

Identity theft: Hawker is no company director
Previous Post
The world will recognise the city with a soul: Karim