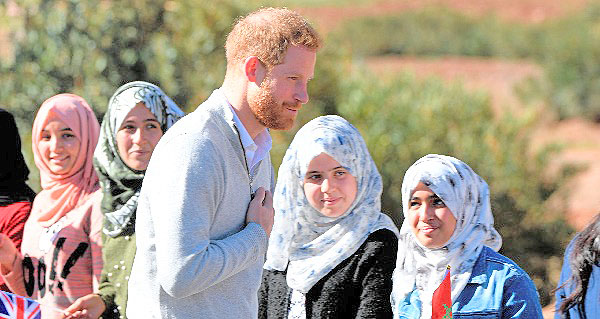 Harry and Meghan on last official trip before birth

Prince Harry, Duke of Sussex, greets children from the “Education For All” boarding house on February 24, 2019, in the town of Asni on the foothills of the High Atlas mountains. Prince Harry and his wife Meghan arrived in Morocco for their last official trip abroad before the birth of their first child, which is due in spring.Photo: AFP

RABAT, Morocco: Prince Harry and his wife Meghan arrived Saturday night in Morocco for their last official trip abroad before the birth of their first child, which is due in spring.

The royal couple, Harry in a light grey suit and Meghan in a red dress, were welcomed with a tray of dates, a traditional ritual of hospitality in Morocco, after they landed in Casablanca.

“Medical provisions” have been made for the pregnant former American actress, who will visit a village in the Atlas Mountains on Sunday morning and the Moroccan capital, according to official sources.

Their visit to the north African country will focus on work to promote girls’ education, women’s empowerment and the inclusion of people with disabilities.

“The Duke and Duchess of Sussex really love being with the people,” British ambassador Thomas Reilly said in an interview with 2M television.

The trip, organised at the request of Queen Elizabeth II, has worried some British media such as the tabloid Daily Mirror which described Morocco as a “danger zone” and its capital Rabat as a “city of riots”.

Before their arrival, local diplomatic sources insisted “Morocco is a pole of stability in northern Africa.”

On Thursday, a protest in Rabat by teachers, which coincided with the anniversary of the February 20 pro-reform movement born out of the 2011 Arab Spring, was dispersed by police using water cannon, injuring several people.

The couple, who will be housed in a royal residence during their stay, will meet with members of the royal family in Rabat Monday afternoon before their departure on Tuesday.- AFP