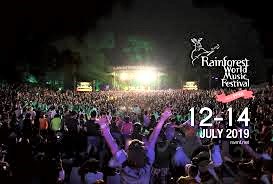 KUCHING: With an estimated turnout of over 20,000, it is undeniable that this year’s Rainforest World Music Festival (RWMF) has gradually gained new followers who are willing to cramp themselves for three-days here at the Sarawak Cultural Village (SCV).

While many lauded the upgrading efforts, the local turnout for this year’s festival was a disappointment to a certain degree.

A check by New Sarawak Tribune over the last weekend discovered that locals had lamented on the increase in ticket prices besides, its inefficient promotion and marketing.

In fact, the poll revealed that many suggested that the organisers should implement a two-tier ticket price system for locals and foreigners, whereby locals would be able to purchase tickets at a more affordable price.

One of the local visitors, Ong Hong, commented that turnout among the locals has significantly decreased within the last few years.

“It is not because people are getting bored with this event, it’s because of the high-ticket prices,” she said.

On the price of tickets, whether it is a one day or three-day pass, Ong recommended it should be lowered for locals.

Describing this year’s promotion as boring and dull, she added that the organiser should advertise not only on social media but also through outdoor advertising.

“I observed that there were very few banners in town this year,” she said, advising the organisers that they should target both local and foreign visitors.

This particular issue was also echoed by two shuttle-van drivers when New Sarawak Tribune asked them to comment on the crowd turnout.

Recalling that the local crowd turnout was merrier in early 2000s until 2015, the drivers revealed that many had parked their cars at the side of the road along Jalan Sultan Tengah, from Santubong Suites up until before the junction to Damai Golf & Country Club.

“There was traffic congestion all the time during the event. Within those three days, it was difficult to find parking spaces at Damai Golf because these were fully taken and people had to park their cars outside by the side of the main road,” they said.

When asked to comment on suggestions to woo the local crowd, both drivers said it is not wise to charge high prices for the locals.

“Tiket mahal gilak, ya orang sik mok pergi. Sepatutnya beriklah harga murah sikit pakei orang kita disitok. (The hike in ticket price has caused the locals to not attend the event. The organisers should try to reduce the ticket price for the locals).”

‘Practical to involve more banks to give out loans’

Tellian constituents get cash from assemblyman

Tellian constituents get cash from assemblyman