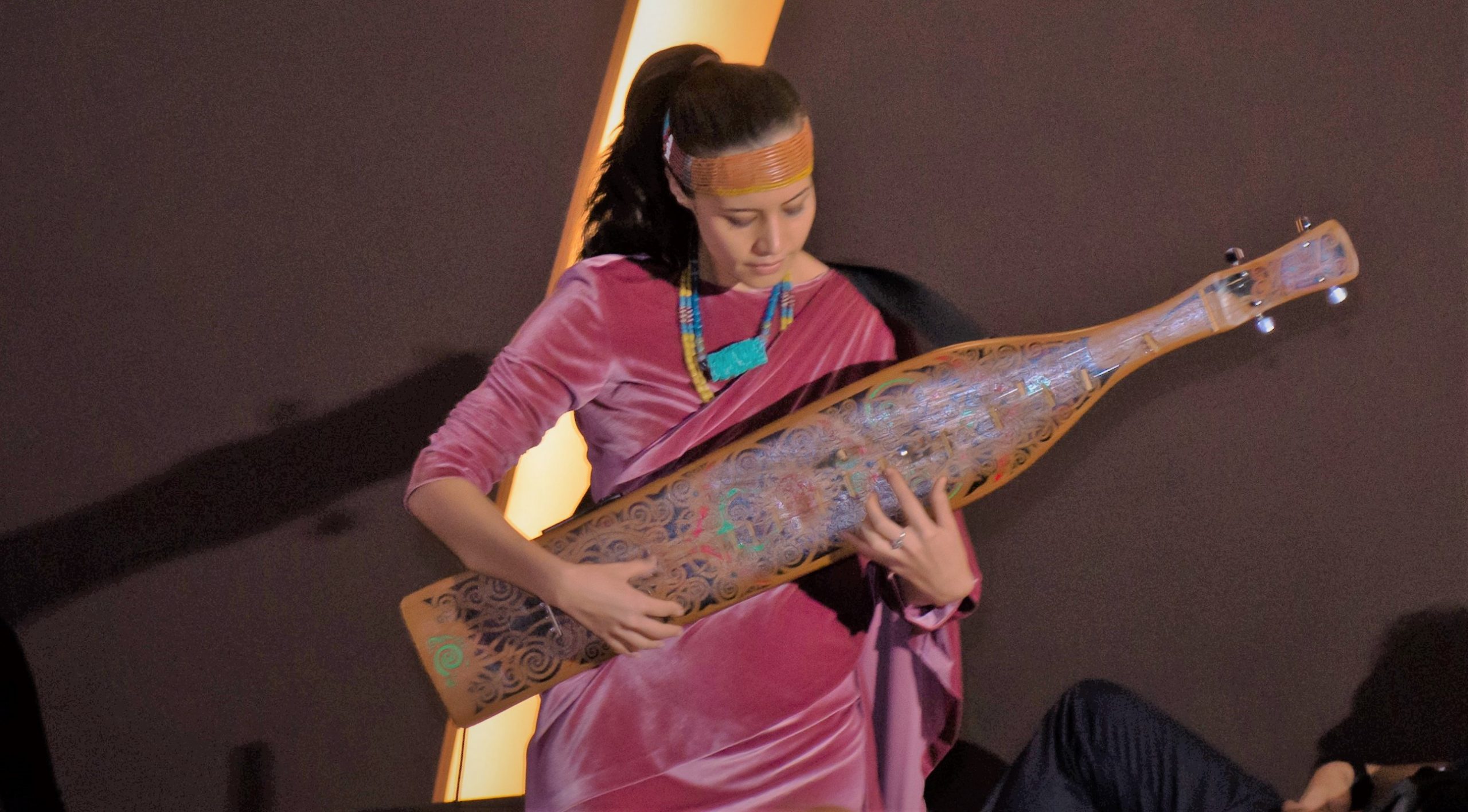 Alena is no stranger to me. I first saw her as a little teenager performing in song and music at a home party in Kuching with other proteges of Sarawak‘s most renowned sape player, Matthew Ngau Jau. In the olden days, only the men played the sape but the taboo was already being broken then.

That was about 18 years ago and in 2016, I was told that a female sape player would form part of our delegation from Tanoti, Kuching to a fashion event in Paris. As the show by Stylo Malaysian Fashion Week took place on a boat on the River Seine, I watched her perform again for the first time in many years.

The lanky, naturally good looking and rather easy-going lass of mixed Kelabit and Italian blood has certainly grown up. Alena was delighting the audience with her gentle soothing voice as she played the iconic traditional lute of the Orang Ulu communities.

Carved out of the bole of a tree and somewhat reminiscent of yet distinct from a guitar in shape, the instrument originally bore two strings and three frets and was no breeze to play. But it is with the sape that she has travelled to countries as diverse as France, the Netherlands, Australia, Iceland, Indonesia, USA, Thailand, Spain, Italy, Germany, the Czech Republic and Nigeria.

On November 27 she launched her ‘Midang Midang’ music video at GSC Quill City Mall, Kuala Lumpur and over a hundred attendees came in support including media and invited guests. Zee Avi, the internationally renowned singer, songwriter, and ukulele player from Miri, Sarawak was also present at the launch.

“Sarawak is mighty proud of this lady and we will continue to support her,” according to Angelina Bateman, Director of Event & Corporate Relations Division, Sarawak Tourism Board as she spoke to the cameras.

Apparently, Alena tells amazing stories through her music that articulates Sarawak’s unique ethnic culture and thus helps to promote the homeland as a tourist destination.

With her focus on bringing native songs and stories to global stages, the event was made possible through a collaboration with GSC and supporting partners which include the Sarawak Tourism Board, Miri City Council, Marriott Resort Miri and Kanid Studio. The music video was co-produced with Project Room, a KL- based production house.

At the press conference, Alena shared her views on the importance of heritage songs. “Heritage songs are such an important way to keep our language, values, and stories alive. Our Kelabit songs almost always have elements of nature, and why this time it was so important for us to film on the land in which the song came from – Miri and Bario village.”

Midang Midang is Alena’s take on an old Kelabit song, passed on to her by elders, which was part of the custom of courtship pre-1930s. The music video seeks to be a contemporary showcase of the work of indigenous youth, intangible cultural heritage and indigenous languages, with Bario and Tusan being the main backdrop of the visual storytelling, in recognition of wider Sarawakian heritage.

It showcases the ancestral Kelabit song in a contemporary manner, demonstrating adaptations of Kelabit music, dance and land, as well as Sarawak fashion with the likes of Lana, Maatin Shakir, Von Jolly Couture, Atelier KarlJimmy, TeeCode, Wan Bynun, Neng Kho Razali, Raben Beads and Tanoti being donned by the star. Make up was by Gabriel Padan. Each film department was led by Orang Ulu youths, proving once again that heritage has a contemporary home.

With an accompanying behind the scenes video, the event hopes to encourage viewers to think about the marginalisation and misrepresentation of indigenous peoples in Malaysian media and the importance of cultural heritage; as well as to give viewers an insight towards a better understanding of Sarawak and Dayak cultures.