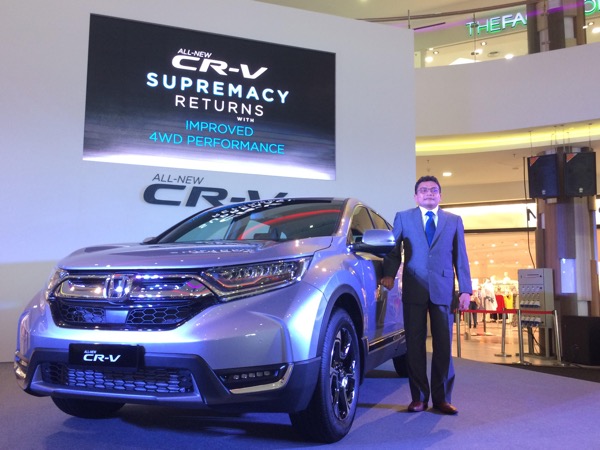 KUCHING: Honda Malaysia yesterday set another new level and benchmark for the SUV segment with the official launch of the completely re-engineered new CR-V.

This fifth generation CR-V offers a comprehensive suite of new, class-leading features that covers its exterior and interior, advanced powertrain and the advanced safety technology.

It will be the first in Asia to be incorporated with the Honda SENSING system, a Next Generation Advanced Safety Technology to assist drivers in potentially dangerous driving conditions.

Present during the launching ceremony held at Vivacity Megamall yesterday was Honda Malaysia’s President and Chief Operating Officer, Roslan Abdullah who said that the safety system will only be available on the premium variant.

“As demands increase, it may be available on all variants, including the 4WD. The 4WD have all been further enhanced up to 10 per cent as compared to the previous CR-V,” said Roslan.

The fifth generation CR-V received a major makeover for the exterior, making it bolder and tougher in appearance. The higher ground clearance at 198 mm (2WD) / 208 mm (4WD) as compared to the 4th Generation CR-V’s clearance of 170 mm gives it a stronger stance.

Taking the advanced technologies in the new CR-V to a higher level is the Electronic Parking Brake (EPB), which replaces the traditional hand/footbrake; this feature also allows more space at the console area and enhances driving comfort.

Roslan disclosed that they are targeting a monthly sales of 700 units of which 8 per cent will be contributed by the East Malaysia market and that the figure is based on a positive figure.

He is also optimistic that the CR-V will exceed the target due to the new CR-V features.

“Within this year, we will also be opening four new Honda Dealer centres to cater to our customers who lives far apart from our current centres.

“I’ve had my test drive with the vehicle and personally I would say that the new CR-V’s performance is much better compared to the fourth generation. It is much more stable, with faster acceleration with better safety system,” said Roslan.

Medan Niaga Satok: Not so lively but comfortable