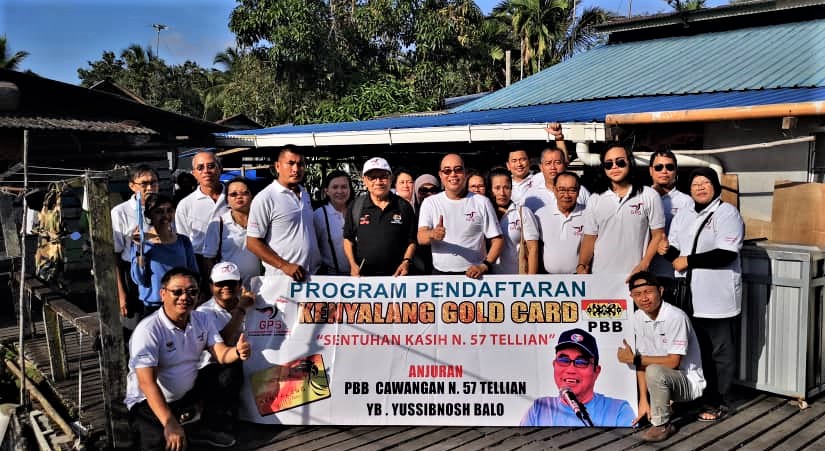 MUKAH: In an effort to raise awareness among the villagers about Sarawak government’s Kenyalang Gold Card (KGC) initiative, Tellian assemblyman Yusibnosh Balo along with members of Parti Pesaka Bumiputera Bersatu (PBB) Tellian branch went to the ground to meet the elderly through the ‘Sentuhan Kasih program’ last Saturday.

According to Yusibnosh, the programme serves to expose the villagers to the assistance provided by the Sarawak government to the elderly.

“Most of our people are embarrassed to go to the office to sign up for the KGC and through our friends from the PBB Tellian branch, we have a house-to-house campaign so that those left behind will not only have the chance to apply but also know about our presence.

“Then they will start asking their neighbours about the programme we are working on and they will be aware of the benefits of the KGC,” he said when met by reporters.

He hoped that through the ‘Sentuhan Kasih Program’, senior citizens in Mukah area would make regular visits to Tellian branch office for assistance not only with filling the KGC forms but other forms involving government offices.

“So far, for today’s campaign we have been to 14 houses and and we have successfully registered over 20 senior citizens.”

He explained that under the KGC, those without life insurance will be registered under the Sarawak state government.

The senior citizens, aged between 60 and 87 years old, are suffering from either old age sickness or certain ailments.

Yussibnosh and the PBB members assisted the seniors in filling the Kenyalang Gold Card forms.

The former Balingian assemblyman also handed over some tokens to each of them and at the same time, explaining to them and their families regarding KGC and its benefits.

The programme will continue on Feb 4 until Feb 6 in other nearby villages here.