KUCHING: True to his words, Chief Minister Datuk Patinggi Abang Johari Tun Openg has fulfilled the wish of people in the heart of Sarawak with the construction of four bridges.

“The dream of the people in Igan and neighbouring areas to have a bridge is being fulfilled. By 2024, there will be no need for them to use ferry to cross the river.

“The bridges will also be toll-free as we are honouring the promise of the late former chief minister Pehin Sri Adenan Satem that we will not impose any toll at our bridges,” he said when officiating at the launch of the Batang Igan Bridge in Mukah today.

Abang Johari said besides the four bridge projects in the central region, there are five others at Batang Rambungan, Batang Lupar, Batang Saribas, Batang Krian and Batang Kemena.

“These nine bridges are implemented by the Gabungan Parti Sarawak (GPS) government. By 2024 they will be completed, toll-free and eliminate the need for ferries,” he said.

On a request to build Sibu-Igan road, the chief minister said the project will be implemented once GPS is back in power after the coming election.

“This new road will cut short the travel time from Kuching to Sibu by two and half hours. From Kuching to Igan will take a little under three hours,” he said.

“So, in three hours, you can easily visit your children studying in Kuching and get health services in the state capital. This is the infrastructure we provide for the people,” he said. 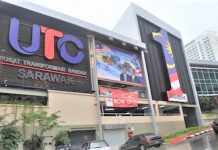