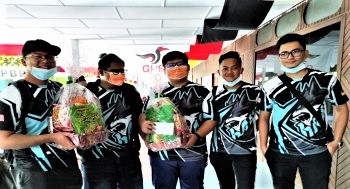 SIBU: Maxwell Longhouse, a 22-door Iban longhouse at Km 21, Jalan Oya, made history yesterday as the first longhouse in Sarawak to host an e-sports event, something that is usually reserved for urban areas.

The Mobile Legends E-Sports competition jointly organised by the E-Sport Nangka Challenge Committee, the Nangka state constituency’s Rural Youth Brigade and Women’s Bureau and the Nangka constituency Service Centre, received an overwhelming response, with over 30 teams registering for the event.

“However, in order to comply with the standard operating procedures to curb the spread of Covid-19, we had to reject half of the registrations for the competition, which has garnered over 28,000 views and likes on our Facebook page,” said organising chairman Abdul Taib Rosli, who is also the president of the Central Sarawak Electronic Sports Association.

When met by reporters after the event’s prize-giving ceremony officiated by Assistant Minister of Education, Science and Technological Research Dr Annuar Rapaee, Taib said although the longhouse did not have wifi broadband facilities, the players were willing to use their mobile broadband to compete.

Meanwhile, Dr Annuar said the move to hold the event at a longhouse was to provide an opportunity to youth from different communities to interact with each other.

According to him, it was also to attract more rural youth to participate in e-sports that usually is dominated by urban youth, besides helping to scout for new talent to represent Sarawak at the 2021 Malaysia Games (Sukma).

“Seeing how this competition has received encouraging support from the youth, we will install broadband services at the Maxwell Longhouse so that the youth here can compete in Mobile Legends E-Sports,” he said.

The Central Sarawak Electronic Sports Association has been asked to organise similar events in other rural areas to allow more youth to participate, he said.

“So far, we have plans to go to Kapit on Dec 27, then to Mulu (northern interior of Sarawak) in January next year, followed by Bukit Goran (outskirts of Kapit) and then Mukah (central coastal region of Sarawak),” he said. – Bernama