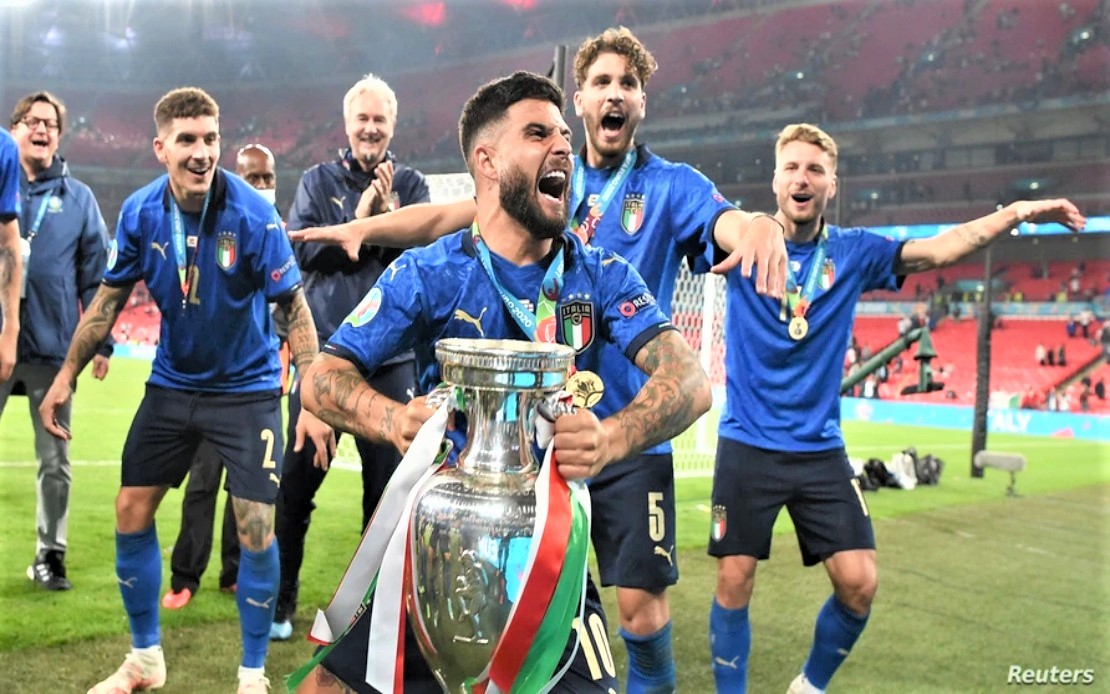 LONDON: Italy keeper Gianluigi Donnarumma was the hero with two saves in the penalty shootout as Italy won the title 3-2 on penalties after the final against England ended 1-1 after extra time.

Marcos Rashford sent his penalty against the post and then the Italian goalkeeper saved kicks from Jadon Sancho and Bukayo Sako after Jordan Pickford had done well to save from Jorginho and Andrea Belotti, reported Xinhua News Agency.

Once again, the penalties were cruel on England, but Italy will argue that after suffering in the first half, they did enough in the remainder of the game to deserve the win.

While Italy maintained the squad that beat Spain in the semi-final, England coach Gareth Southgate returned with three central defenders who had served so well against Germany.

Southgate’s tactics paid off when Luke Shaw volleyed England into a second minute lead. Harry Kane created space for Kieran Trippier and the wing-back had time to pick out Shaw’s run at the far post.

Once ahead, England looked comfortable with Kieran Trippier seeing a low cross cleared, but overall, the English were content to close down the spaces in midfield and defense, with Kalvin Phillips, Declan Rice, Mason Mount and at times even Harry Kane, closing down and denying the Italians angles to pass the ball.

Perhaps that meant the English at times lacked men to launch effective counter-attacks, but Italy were unable to build anything and their only chance of the half came from an individual run by Federico Chiesa whose shot went wide.

Italy came out strongly at the start of the second half, looking to dominate where they had struggled before the break. Insigne fired a free kick just high and wide after a foul from Raheem Sterling and although later Harry Maguire headed a free kick over, it was game on for Italy.

Federico Chiesa’s run ended with Pickford blocking from a narrow angle and Pickford did even better to block Chiesa’s shot in the 62nd minute.

Italy were playing in and around the England penalty area and although Maguire flicked Chiesa’s cross out for a corner, Leonardo Bonucci was able to scramble home from close range after Pickford had blocked Marco Verratti’s original header.

Bukayo Saka and Jordan Henderson came on as England reverted to four at the back, while Chiesa had to limp off with an ankle injury as the game went into extra time.

With four minutes remaining of normal time a pitch invader stopped the action and stewards struggled to catch him adding to a sense of chaos at the stadium after ticketless fans earlier forced their way in.

England were struggling to string passes together and it wasn’t long after Kalvin Phillips fired wide that Jack Grealish replaced Mount and Grealish almost set up Saka with his first action, while at the other end Pickford did well to deny Federico Bernadeschi.

Pickford blocked Brernadeschi’s free kick, while John Stones was inches away from a free kick as Donnarumma came flying out as nerves got frayed, legs tired and England looked to retake the initiative.

Southgate made two late changes, bringing on Rashford and Sancho for the penalties, but the move backfired as neither scored their spot kick.  – Bernama