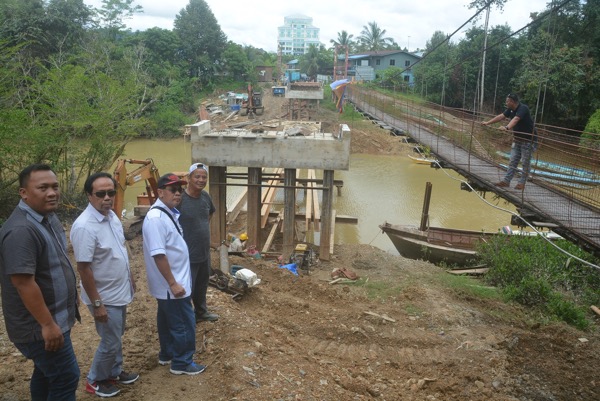 Jamit (third left) on a site inspection of the steel bridge across Sungai Kapit.

There had been a delay in work progress and the site visit was to find out the actual cause of the delay.

At the construction site, sub-contractor Nelson Sia told Jamit that the delay was mainly due to the recent wet weather and the high water level that hampered progress of the work.

“There are three pillars on each side of the river bank. When the water level is high, we couldn’t do anything and that explains the delay. Now with the return of fine weather, I can assure you that we shall put in more workers to speed up the work progress,” said Sia to Jamit.

Speaking to the press at the site, Jamit said the kampung folks have complained to him about the work delay.

“Today I am here because I want to find out why there is a delay in this project. However, I have received an assurance from the sub-contractor that things would move on well from now on,” he said.

The steel bridge is meant to improve connectivity between Kampung Baru at the end of Jalan Suhaili and Kampung Muhibah Bletih. The project was funded by the Ministry of Rural and Regional Development (KKLW) and awarded to Ladang Morni Besteri Sdn Bhd.

It is 4.2 metres wide and 100 metres long and erected next to the existing suspension wooden bridge.

Currently the suspension bridge is meant for pedestrian and motorcycles only. With the increasingly heavy traffic flow between the two villages, the steel bridge was approved by KKLW.

Pemanca Wasli Nor when contacted hoped the construction work could be completed as soon as possible. When the new bridge is up next year, the old wooden bridge will not be dismantled.