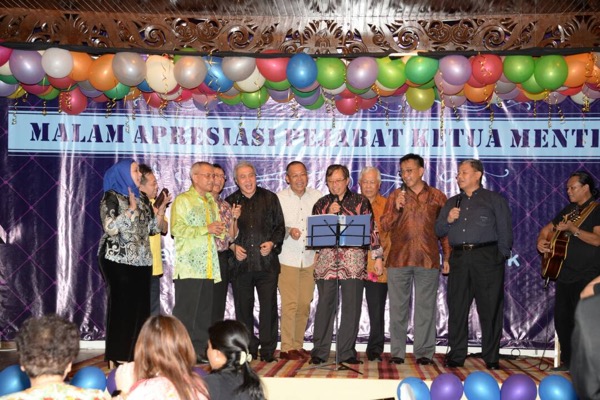 Johari: Petros has been formed

“Tonight, I want to tell you that we have officially formed our oil company, Petros,” the Chief Minister, to the applause of the crowd, said in his address to Ministers, staff members of his ministries and office during an appreciation dinner organised by his office at a leading hotel here.

He said all the board members of the company had been appointed and  they were drawn from among Sarawak professionals with wide experience in the oil and gas industry and that none of them were politicians.

The Chief Minister, who was accompanied by his wife, Datin Amar Dato Hajah Juma’ani Tun Tuanku Haji Bujang, however, did not reveal the name of the board members, or the chairman or the CEO of the company.

The formation of Petros is an unprecedented step taken by the State Government to enable Sarawak to actively participate in the extraction of oil and gas in Sarawak while still pursuing its request for a 20% royalty from Petronas.

Secondly, he said that the Chief Executive Officer of the newly-formed Development Bank of Sarawak (DBOS) had been appointed without naming the candidate and that the bank would start its operation soon.

He also pointed that all the board members of DBOS were professionals and non-politicians under the chairmanship of Tan Sri Datuk Amar Haji Mohamad Morshidi bin Abdul Ghani, who is also the State Secretary.

Johari added that steps were being taken to strengthen the state’s human capacity by giving Sarawakians the opportunities to pursue postgraduate studies locally and overseas.

He said the Sarawak Foundation, which he was heading, would increase scholarships and loans to Sarawak students who were eligible to be admitted to local as well as foreign universities for postgraduate studies.

“I have requested the Sarawak Foundation to give all postgraduate scholarships, particularly PhDs, because giving our children opportunities to study up to the PhD level will give birth to new researches and researches are important in order to add value to our resources,” he pointed out.

Johari reiterated that a state research council under the chairmanship of the Minister of Education, Science and Technological Research would be set up to oversee all the future research efforts for the  benefit of the state.

He said for a start he had personally instructed that a research be carried out in collaboration with Swinburne University on prototyping an oil palm fruit harvesting machine that would be equipped with a sensor to automatically determine the ripeness of fruit.

He added that he had also instructed that  research be conducted on the search for protein materials among the state’s rich biodiversity resources that could replace human DNA protein in a joint effort with   Swinburne University’s main campus in Australia.

Johari  expressed his belief that the identification of such a protein and its extraction would bear great significance to the continuing search for the treatment of cancer.

He thanked all the ministries for their support in the pursuit of new policies, approaches and technologies to transform Sarawak into a digital economy under his leadership.

He encouraged other ministries to hold similar gatherings to honour their staff officers and appreciate their support towards the government’s effort to leapfrog the economy from conventional economy to one based on digital technologies.

The reception was also to coincide with the 67th birthday of the Chief Minister that fell on August 4.

admin33
I am a web developer who is working as a freelancer. I am living in Saigon, a crowded city of Vietnam. I am promoting for http://sneeit.com
View All Posts by Author
Preparing for Visit Miri Year early
Previous Post
Siniawan Heritage Fiesta to draw more than 25,000 people