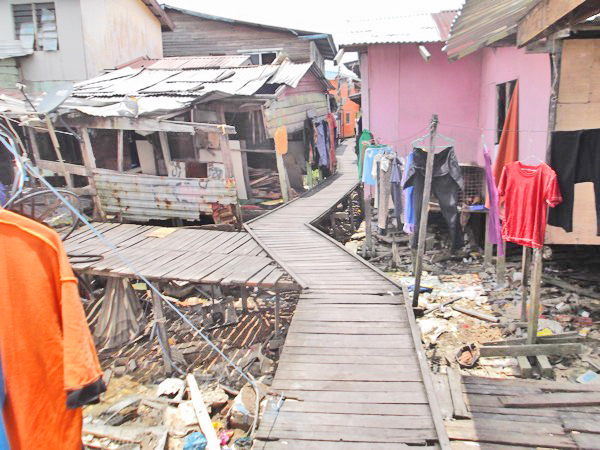 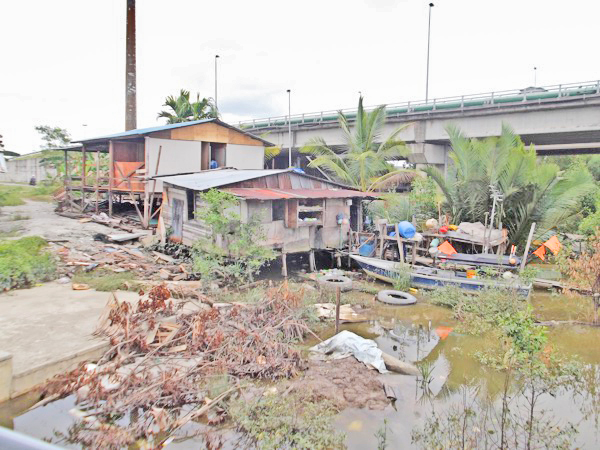 A squatter hut or home at the Kampung Sri Maimunah esplanade, next to the CMS factory in Pending.

Rubbish collecting under the stilted homes at Kampung Sri Maimunah. 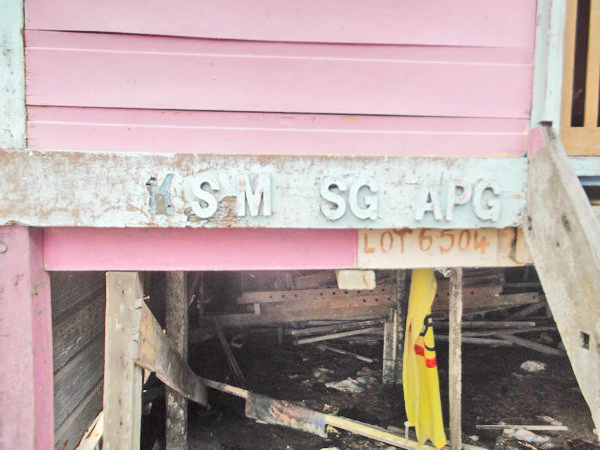 The old address of a resident’s home at Kampung Sri Maimuna-a forgotten village at Sungei Apong. 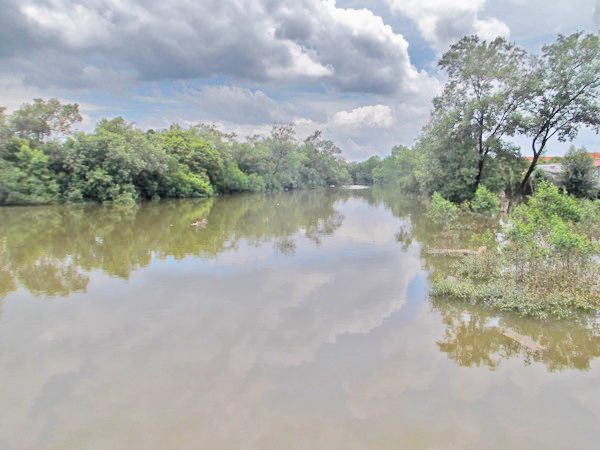 Rajah Brooke’s Maimuna–buried in a watery grave during High Tide at the mouth of the Sungei Apong.

KUCHING: Kampung Sri Maimunah, a Malay village of 40 families in the midst of a Chinese community at Sungei Apong, is yearning for respect and recognition.

Ever since the Opposition took over this Kuching constituency, Kampung Sri Maimunah or KSM, has had to face flooding woes and very little development.

A second generation Malay from the village named Usup said that many of the families live in dilapidated houses on the banks of the Sungei Apong, a tributary of the Sarawak River.

He said: “Over the past two years the opposition DAP has not even visited our village, half of which is under water every time it floods. Our wooden shack which has been our home for more than 40 years has been spared the worst part of the floods, but we are inland and the water is only as high as the floor.

“The homes closest to the river bank are sometimes half submerged, but they are quite lucky because they get compensations of about RM500. Our houses are partially destroyed but we get nothing,” he quipped.

Usop said their salvation came recently when Member of Parliament for Petra Jaya, Datuk Fadillah Yusof of Parti Pesaka Bumiputeras (PBB) adopted a child from the village and since then the BN government has built a concrete esplanade next to the village.

Usop said: “For one thing, there is no village rubbish collection system and the filth under our homes is continuously accumulating. Maybe that is one of the reasons flooding is a big problem at Sungei Apong.

“It’s as if we are living in the colonial era when the Malays were treated like paupers in our own land. But since we became Independent and are staunch supporters of the Barisan Nasional, why are we treated like this?

“We used to have a large signboard with the name of the village Kampung Sri Maimunah or KSM emblazoned at the entrance of the village. Now, even that has been removed and our younger generations have lost their identity,” he lamented.

KSM is just opposite a famous vessel with links to the Brooke era which lies buried and forgotten in a watery grave. The Maimuna, Steel Single Crew motor vessel was built for the third Rajah Vyner Brooke in 1926.

It is was one of two vessels Maimuna and Lipis, ordered by Vyner for his private use. The Maimuna was built by J. Pollock, Sons and Co Ltd in Faversham, England for coastal services in 1926, the 316 ton Maimuna measures 130ft long.

Initially it was used by the Rajah’s family for leisure. Later it was used to ferry cargo from Kuching to the coastal areas and went as far as Miri.

In an interview several years ago, retired Radio Sarawak Information Officer, Hajah Maimunah binte Haji Daud said the vessel often cruised pass their home by the Sarawak River, sometimes with the Rajah on board.

“I was named after the Maimuna. My grandmother told me that the Maimuna plied the river very often that they decided to name me after the boat,” she said.

The boat was so famous that poems have been composed about the vessel. Hajah Maimunah has recorded one of the poems on Maimuna in one of her publications on Malay poems from Sarawak.

The poem that is sung during the “Begendang” festival, where men and women, court each other goes like this; “SIAPA BILANG MAIMUNAH LAJU, LEBIH LAJU KAPAL MELUAN, SIAPA BILANG SAYA MENGKUDU, LEBIH MENGKUDU KEKANDA TUAN”

(Who says Maimuna’s speedy, the vessel Meluan is faster! Who say’s I am a flirter, At that game, Sir, you’re the master.

Ten years ago the opposition DAP assemblyman Violet Yong called on the Kuching City Council to remove the vessel which was obstructing the river to the Sungei Apong Jetty.

Old timer Lau Ah Choo, once said : “When I was a fisherman we used to ply the Sarawak coast in our Kotak fishing boats and we would occasionally pass the Maimuna. Everyone knew that it was the Rajah’s vessel.”

Born in China, Lau set up home at Sungai Apong with his father and others from this famous Heng Hua fishing community in 1928.

After the Japanese invaded Sarawak in December 1941, the boat was used for cargo services. According to Lau, just before the war ended Dutch war planes bombarded parts of Kuching but missed Maimuna.

When the Japanese invaded Sarawak, Maimuna and Lipis were attacked in Miri. William Chater in “Sarawak Long Ago” states: “They (soldiers from the Sarawak Rangers and the Sarawak Constabulary) left Miri on the Rajah’s yacht the Maimuna and accompanied the Lipis, which carried the oilfield’s personnel and some Punjabi troops.

“About halfway to Kuching, the ships were attacked by a Japanese seaplane. The Rangers let it have all they had—rifles and even the four-inch gun on the stern.

“They succeeded in driving off the plane but it then attacked the Lipis. Here the machine-gunner on the bridge was killed. Then the Commanding officer of the Punjabi troops of Sarawak took over and was in turn killed while trying to fix the jammed machine gun.

“It was a tragic sight as the two vessels came upriver and rounded the bend near the Borneo Company (in Kuching). The Maimuna was practically unscathed but the Lipis followed slowly behind, flag at half-mast and sides scarred with bullet marks. She buried six dead at sea and twenty six wounded, including the Captain, were taken off and sent to the General Hospital.”.

According to some sources at the end of the war the Australian Allied forces bombed Kuching and the Maimuna was apparently hit. It sunk in the Sungei Apong, about 1,000 yards from the estuary with the Sarawak River.

However,  Lau, a former Chairman of the Heng Hua Kotak Association, said that the Maimuna escaped unscathed. “In fact the Dutch planes had bombed parts of Kuching but the Maimuna was well concealed in the Nipah swamps of Sungei Apong.

He said that after the war and the cession of Sarawak to Great Britain in May 1946, the Maimuna was used as a cargo ship along the coast. Just before Malaysia 1963 was formed it was abandoned at its present location.

“About two years later it sprang a leak, listed and sank. I remember we had to pass the vessel every time we went out to sea and felt sorry for her—a forlorn lady whom nobody cared for.”

When told that the authorities may consider blowing up the vessel, he felt that it would be a waste because we would be losing a part of our history.

“If I remember well during the time of Tun Abdul Rahman Yakub, there was a proposal to blow up the ship. But it was called off because the ship was too close to a Malay Kampung called Sri Maimunah.”

In fact it is interesting that the villagers of Kampung Sri Maimunah (note that the original name of the vessel was Maimuna and not Maimunah) did not know that it was one of the Rajah’s ships.

One of the residents of Kampung Sri Maimunah said that his ancestor “Nenek Merang” spoke about the ship which was buried about 50 yards from his home across the river bank.

He said that outsiders have sawn off part of the upper portion of the ship to sell as scrap metal and that 90 per cent of the vessel is embedded in the mud and has almost disappeared.

Nek Merang said: “Only a small part of the 130ft ship, about 15 feet, can be seen protruding out of the water when the tide is lowest. The rest of the boat is completed buried in the mud.

Most villagers at KSM hoped that the government would make an effort to resurrect the Maimuna because for history’s sake, she does not deserve such as ignominious demise.