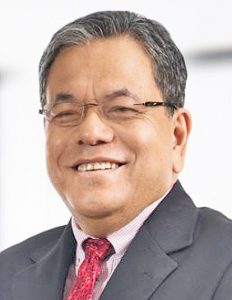 “To be honest, this is the first time I’m being interviewed for a whole one hour,” confessed veteran newsman Tan Sri Johan Jaaffar (pic), fresh from being conferred the Tokoh Wartawan Negara or National Journalist Award 2018 by the Malaysian Press Institute (MPI).

He said this to the host of Bernama News Channel’s Ruang Bicara programme in which he appeared as a guest recently.

When he was at the peak of his career, the former Media Prima Bhd chairman barely had any time to entertain requests for interviews but the irony of it all was that when he hosted television shows like RTM TV1’s Isu Semasa and Debat Perdana and TV3’s Soal Rakyat, he used to hurl a barrage of tough questions at his guests.

Throughout his career, Johan had interviewed three prime ministers, including Tun Dr Mahathir Mohamad, and nearly all the Cabinet ministers from Tun Abdullah Ahmad Badawi’s era to date, as well as most of the Members of Parliament from 2005 onwards and leaders from other fields.

This writer himself had the opportunity to interview Johan twice over a 21-year period. The first was in 1996 when Johan was the editor-in-chief of Utusan Malaysia group and the second, in 2017.

The first interview revolved around the local film industry and was featured in RTM’s Rentak Karya programme. The second interview took place just after Johan tabled a working paper at a Cultural Congress pre-event organised by the International Islamic University Malaysia.

That epitomises Johan, whose inclination for cultural, literary, media and corporate matters earned him the 12th Tokoh Wartawan Negara award at the MPI-Petronas Malaysian Journalism Awards 2018 on April 26.

From Johan’s involvement in literary pursuits and journalism, one is reminded of a few literarians who started off as journalists.

The most well-known among them was Abdul Rahim Kajai, who is regarded as the father of Malay literature and whose name has been immortalised in the MPI-Petronas Malaysian Journalism Awards’ highest award, the prestigious Kajai Award.

Also in the journalist-literarian list are eminent personalities, most of whom built the foundation of their writing skills whilst working for Utusan Melayu. Among them are three National Literary laureates, Keris Mas, Datuk Usman Awang and Datuk Seri A Samad Said.

Today, 66-year-old Johan is on a par with the above luminaries, as well as other prominent journalist-literarians such as Ahmad Boestamam, Ilias Zaidi, Zahari Affandi, Khatijah Hashim and Zaharah Nawawi.

He is also a theatre playwright, having written scripts for contemporary theatre productions such as Angin Kering, Kotaku Oh Kotaku and Sang Puteri, with his latest effort being the script for Pokok which was staged at Dewan Bahasa dan Pustaka (DBP) and directed by U-Wei Shaari.

Johan said those involved in both genres (journalism and literature) were able to leverage their exceptional language skills to give a new dimension to the world of journalism.

His own competency was clearly reflected in the columns that he wrote for various newspapers, including the New Straits Times, Berita Harian and The Star.

As a writer, Johan always regards himself as a pragmatist when it comes to the question of language.

His firm principles on the issue of language must have started to take shape after he joined DBP in 1977, where he served as language planning officer and later as head of its magazine division which published several magazines such as Dewan Bahasa and Dewan Sastera.

Several years later, after he resigned as Utusan Malaysia group editor-in-chief and returned to DBP as chairman of its Board of Governors, he continued with his linguistic pursuits but on a wider scale.

He said he always placed language as the core strength of any field of writing.

“I often give examples of novels and other published works that sometimes set aside grammar rules and such things.

“When I come across a lengthy sentence of 25 to 30 words in a news report, I start wondering which is the subject and which is the predicate. A language is beautiful when it is used correctly, so in journalism, the emphasis should be on its correct use,” he said.

On media freedom, Johan said while press freedom was essential, one has to be realistic as well.

“There was no such thing as absolute freedom in any country and even media owners would feel the urge to exercise some form of control over the press.

“Although we must have the confidence to create an ecosystem that allows the media to be free, this process will remain the idealism of media practitioners and also the government,” he said.

The press freedom issue is the basis for the setting up of the proposed Malaysian Media Council, which was mooted decades ago.

Media practitioners are hoping that the government would expedite the establishment of the council, which will serve as a self-regulatory body, and the abolition of the Printing Presses and Publications Act 1984.

Johan also urged industry players to relook their business model if they want to survive in the midst of the emergence of the new media. – Bernama