An engineer who later became a businessman, 28-year-old Ashweein is a ‘macha kaca mata’ which translates to ‘brother wearing spectacles’ in Tamil. Widely used in Malaysia, macha refers to an Indian friend but to Ashweein, it means, “Majestic Amazing Champion Has Arrived”. Indeed he has and being a ‘Tambi’ (some may find it offensive but the word translates to ‘little brother’ in Tamil), he considers it as ‘Terrific Analogy of Me Being Impressive’. 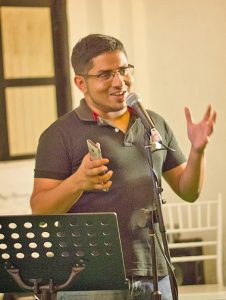 And those are just some of the ways he uses to make life interesting. As a stand-up comedian, his inspiration comes from everything he sees. “I just see things happening around me and imagined it to happen differently, and how it would be hilarious if it happened that way,” he said.

To him, stand-up comedy is an art that requires passion and hard work. “Personally, I gave stand-up comedy a try because I have an inclination for it. I grew up watching Russell Peters, Chris Rock. I love the fact that it is an evolution of public speaking and it requires research and intelligence to perform it.”

Raised in Sarawak, Ashweein got the taste of what it is like to be a minority among his peers. Going to a Chinese school, he experienced being the only Indian in secondary school apart from his siblings. Ashweein chose to look at the bright side of things despite the setbacks.

“I was always referred to as Tambi, but I was not going to allow a word bring me down, or offend me because that is what Sarawakians refer Indians as. In a way, it is a form of respect as it meant little brother,” he disclosed.

His open-mindedness is what shaped him up to become who he is today.

Just sitting through the interview with him made me laughed at the funny anecdotes and puns he shared. With our diverse culture and differences in language, it provides him with a variety of words and ways to play with it. And as a Sarawakian Indian, Ashweein mentioned it allowed him to create an array of wordplay.

“Things like ‘klaka’ when told to a West Malaysian, they would think you are trying to tell them something funny. Or when they hear words like ‘tetak’ or ‘tikam’, they will feel like oh my God, these people want to chop me down or stab me but instead, it meant ‘laugh’ and ‘throw’ respectively.”

It is because of all these anecdotes and stories from growing up that Ashweein would tell his friends while working in West Malaysia several years back that motivated him to become a stand-up comedian.

“Honestly, I did not think I was funny until I received validation from my first performance. Nonetheless, the initial validation came from friends and families who would tell me I am pretty funny,” shared the man of many traits.

To him, laughing and making jokes is a way of relief for stress, anxiety and depression. “Because when you meet friends, you tell funny stories, you will forget the problems in life, even just for a while. And then you will realise that some of the problems in life is not that troublesome if you see it in a funny way,” Ashweein explained. His way of relieving stress is to draw a sarcastic picture around his problems.

When asked whether he experiences stage fright, Ashweein gave a resounding yes. “Stage fright and all is like a normal prerequisite. You would have butterflies in your stomach. I would get it all the time, I would feel like everything is going to be good but during the show, once I see the crowds, my heart beats faster.”

Being onstage, Ashweein uses talking points, and at times, he would rap. “But when I initially started as a stand-up comedian, I used to have a book of my talking points in front of me. It was lame to think I used to do that!”

Another thing that makes him funny is his ‘Saralawak’ crews, “We complement each other’s jokes well,” he said.

‘Saralawak’ is a group for comedians founded in 2018 by Ashweein and a few other comedians, namely Maclean Patrick, Camillus Caem and Terrence Aaron. Being one of the founders, he also shared a tip on how to be funny — the need to be open-minded, both the comedian and the audience.

“To me, comedy is about accepting who you are, your flaws and perks which gives you the ability to make fun of others. It can be seen as rude and derogatory, so you have to put it nicely.”

Started doing stand-up comedy in 2016, Ashweein encourages those who think they are funny to have a go at their open mic session. And for those who are curious to know how funny Ashweein and his crews are can watch them onstage for their stand-up comedy show La-WAK Sik?! Vol 2, on October 19, 8pm onwards at SMA Yayasan Sarawak Building, and also their Comedy Rap Battle called Bar-Olah, where the comedians will battle local rappers at Location X (the old Ting and Ting Supermarket) on October 16, also 8pm onwards.

Details of this can be found on Ashweein’s and Saralawak’s social media links at Facebook @ashweein.narayanan and Instagram @ashweein, or at Facebook and Instagram @saralawak. Ashweein is also one of the founders of HAUS Kch — but that is a story for another day.