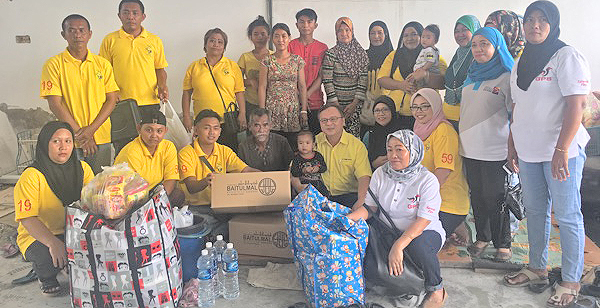 They helped Junaidi , his wife Siti Sa’adah, 53, daughters Siti Mariam 32, Siti Jamayah,20, Siti’s husband Aman Shah Jimmy, 24, and Siti’s daughters aged 23 months and 10 months move out from the top floor of an abandoned building at Kota Sentosa to a temporary shelter at Satok.

Jamaiyah Sulaiman from the Welfare Department said the department would be helping the family with monthly monetary aid, find proper jobs for them and include them in the housing scheme for the hardcore poor.

They used to stay with one of Junaidi’s daughters in Kampung Haji Baki and her family. However, due to family conflicts, Junaidi said he had no choice but to move out with his two other daughters and family.

“I did go around looking for rooms to rent but because there were seven of us, not many people were keen to rent us only a room and it is too expensive to rent a whole house  with the mere wages that my son-in-law and I earn. So I scouted around and found this abandoned building and decided to move to the top floor,” Junaidi told New Sarawak Tribune.

The abandoned building, it is learnt, faces a jungle and is a favorite haunt for drug addicts at night. Junaidi and his son-in-law, who is also an odd job worker, tried to make the room as comfortable as possible.

The adults slept on cardboards while Junaidi’s granddaughters slept on an old mattress. As the windows were  without shutters, they used plastic sheets they found in dustbins to cover them at night.  Junaidi  blocked the doorway at night with a plank he found on the ground floor.

During the day, Junaidi and his son-in-law looked for jobs at Kota Sentosa. The women cooked the family meals over a  stove they bought after moving out of the house in Kampung Haji Baki. Although life was hard, Junaidi said they were happy and grateful to be together.

During the thunderstorms, he said all of them would get wet as it was impossible to cover all the windows.

Junaidi said there were drug addicts loitering on the ground floor. He said it was fortunate that they only went upstairs once but left him and his family alone.

“In a way, we did not bother each other. I was worried about the safety of my daughters and granddaughters  but I had no choice,”he confessed, adding that his granddaughters were bitten nightly by mosquitoes.

Junaidi’s plight came to light recently when a Sentosa SUPP member from Haji Baki met him in Kota Sentosa and asked how he was. The member went on to alert Batu Kitang state assemblyman Lo Khere Chiang who subsequently informed the Welfare Department.

Lo said he was thankful his branch members and the Welfare acted swiftly to save the family from the dangerous place.

“The scheme is to help them live independently. We have asked for RM250 to assist them monthly and will scout for a house in Mile 17, Batu Gong which they can rent for RM150 per month. Meanwhile, the Welfare Department will help them find jobs. Once they are able to do that, they can apply for their own house under the hardcore poor programme’ he said.

Lo added that the Sarawak government’s welfare scheme was good. Instead of giving the poor and helpless “fish”, it was giving them a chance to “fish” for themselves and be independent, he said.