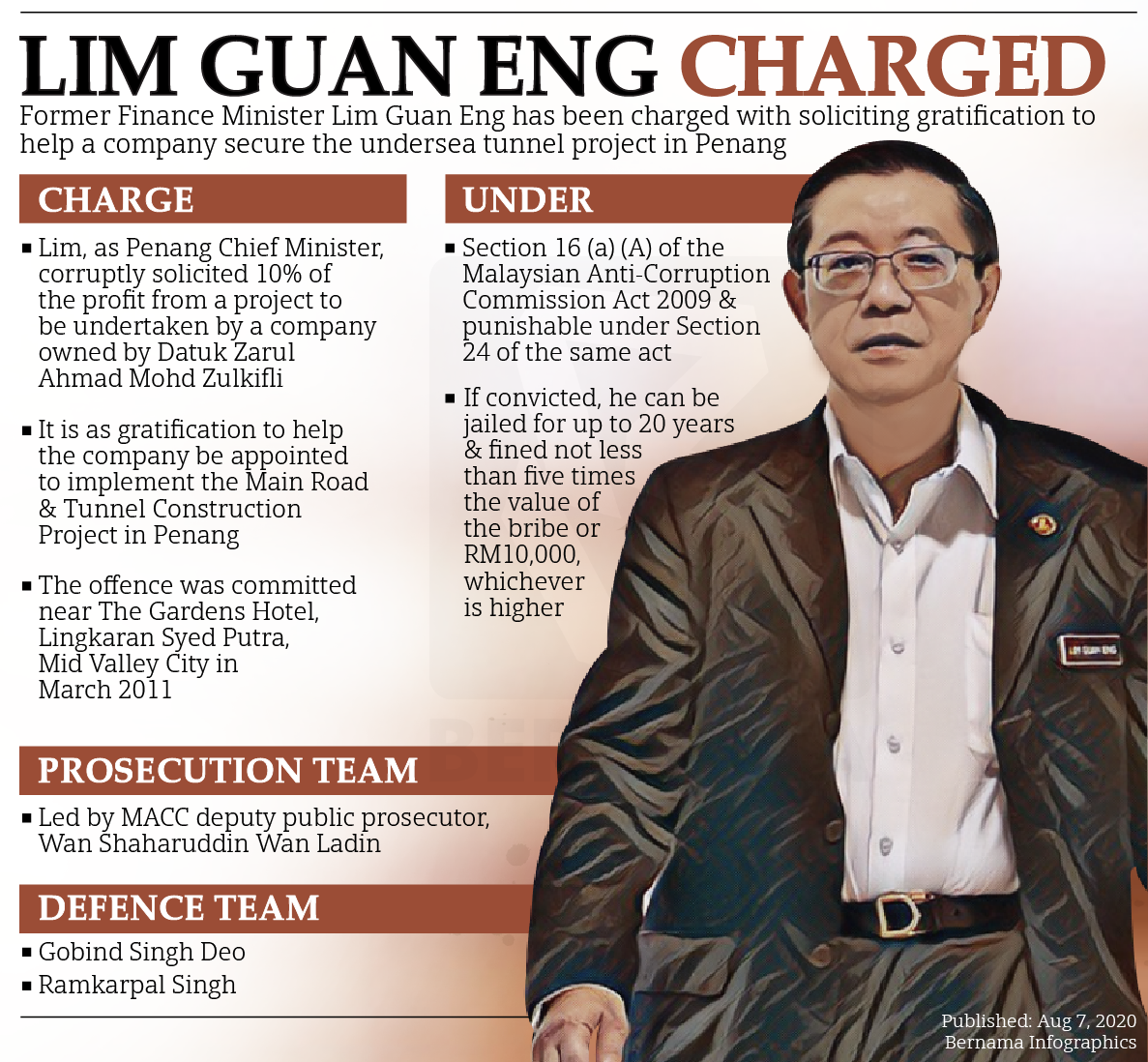 KUALA LUMPUR: Former Finance Minister Lim Guan Eng who pleaded not guilty in the Sessions Court here yesterday to a charge with soliciting gratification to help a company to secure the Penang undersea tunnel project, was allowed bail of RM1 million with two sureties.

Judge Azura Alwi allowed Lim, 60, to pay RM500,000 of the bail amount yesterday, with the balance to be paid by this Monday. The Bagan Member of Parliament had also surrendered his passports, including the diplomatic passport, to the court.

The judge reminded the prosecution and the defence against making any comments that will subjudice the case.

“Once the case is in the court, it is your respective responsibility to not make any comments that may sub judice the case. Complaints can be made if there is such a comment,” said Azura, who also set Sept 9 for mention.

On the prosecution’s application for Lim to report himself at the Malaysian Anti-Corruption Commission’s headquarters in Putrajaya on the first week of every month, Azura said it was not necessary as the bail amount set was high.

Earlier, MACC deputy public prosecutor Wan Shaharuddin Wan Ladin proposed bail of RM2 million with two Malaysian sureties against Lim and for his travel documents to be surrendered to the court.

Wan Shaharuddin said the RM2 million bail amounts was reasonable considering Lim’s status as Penang chief minister then and that he had breached the trust given to him.

“I request the court to take into account the type of offence that was (allegedly) committed and the position held by the accused at that time. Corruption is like cancer because a civilized society can collapse in the blink of an eye with these corruption offences. Malaysia can collapse in one night with corruption.

“The prosecution also hopes that this court is not bound by the previous decision of the Penang Court in not ordering the surrender of the accused’s passport to the court (as) in the bungalow case made against him,” he added.

Wan Shaharuddin also requested the court to order Lim not to intimidate the witnesses in the case, and if there were any complaints of him doing so, his bail was to be revoked.

Wan Shaharuddin said Lim would also be charged in the Butterworth Court, Penang, and next Monday and if he (Lim) was given a high bail, the prosecution would apply the bail imposed by this court.

Meanwhile, lawyer Gobind Singh Deo, representing Lim, requested bail of RM500,000 on the grounds that his client had cooperated with the MACC throughout the investigation and was also at the MACC headquarters in Putrajaya at 10pm the day before to give his statement.

“My client is not guilty at all and he will use the court to show that he is innocent. Therefore, we strongly object to the RM2 million bail amount offered by the prosecution,” he said, adding that no amount was stated in in the charge.

On the issue of Lim’s passport not surrendered to the court in the bungalow purchase case, Gobind said there was no evidence to show that his client did not appear in court during the proceedings of the case.

He said there was also no necessity for his client to make his appearance at the Putrajaya MACC office every month as requested by the prosecution.

“There is no need for my client to report to the MACC office because he will appear in court according to the dates that have been set,” he said, adding that Lim was not a flight risk.

The court interpreter had earlier read out the charge against Lim, who was in a black suit, to which Lim said “not guilty” when asked for his plea.

He was charged, in his capacity as the chief minister of Penang then, to have corruptly solicited gratification for himself as an inducement for helping the company to secure the Penang undersea tunnel project.

He is alleged to have sought 10 percent of the profit to be made by the company from Datuk Zarul Ahmad Mohd Zulkifli, who is a director at Consortium Zenith Construction Sdn Bhd.

Lim, who is Bagan Member of Parliament, was charged with committing the offence near Hotel The Gardens, Lingkaran Syed Putra, Mid Valley City here in March 2011.

The charge was framed under 16(a)(A) of the Malaysian Anti-Corruption Commission Act 2009 and punishable under Section 24 of the same act, which provides imprisonment for up to 20 years and a fine of not less than five times the sum or value of the gratification, or RM10,000, whichever is  higher, upon conviction.

Prior to this, Lim had been charged in the Penang High Court with corruption involving the purchase of a bungalow at below the market price.

Investigations commenced in March 2016, which led to Lim and businesswoman Phang Li Koon charged in court for corruption in June that year.

This followed by a series of trials which eventually resulted in a discharge amounting to an acquittal for Lim and Phang in September 2018.

Meanwhile, before the start of the proceeding yesterday, a commotion broke out at the public gallery in the courtroom when Sungai Pelek State Assemblyman Ronnie Liu, who did not have a pass to enter the courtroom, refused to leave the court after being asked to do so by the police and staff there.