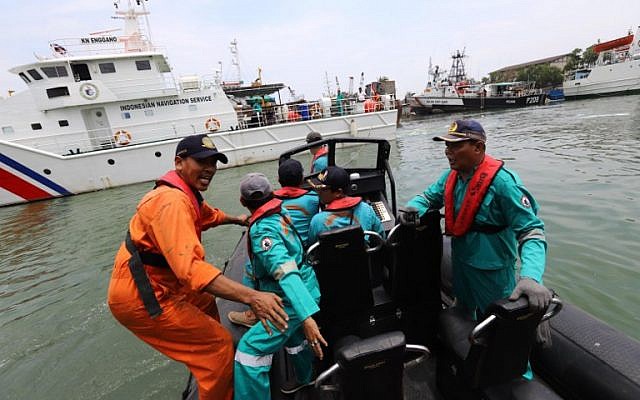 Lion Air to resume search for victims of Indonesia crash

Members of a rescue team prepare to search for survivors from the Lion Air flight JT 610, which crashed into the sea, at Jakarta seaport on October 29, 2018. Photo: AFP

The Boeing 737 MAX vanished from radar 13 minutes after taking off from Jakarta on October 29, crashing into waters off the north coast of Indonesia’s Java Island and killing all 189 people on-board.

Authorities called off the grim task of identifying victims of the crash last month, with only 125 people officially identified after tests on human remains that filled some 200 body bags.

Following requests from victims’ families, Lion said it had allocated 38 billion rupiah ($2.6 million) to hire a Dutch company to continue the search with its ship the MPV Everest.

“The search operation will focus on the latest coordinates of the crash… with an operational time of 10 consecutive days in December,” the airline said in a statement.

The MPV Everest, a 142-metre long vessel with state-of-the-art remotely operated vehicles, will arrive near the crash site on Wednesday.

Bad weather had delayed its trip from the Malaysian port of Johor Baru.

News that the hunt for the wreckage would continue with the new vessel was welcomed by Evi Syamsul Komar, whose nephew was aboard the flight.

“We have heard many promises before, we don’t know who to trust anymore, but our family is still waiting,” Komar told AFP.

Dozens of family members whose loved ones were killed in the crash protested in Jakarta last week, demanding the search continue.

They called on authorities to help retrieve the remaining 64 bodies and pay compensation.

Nearly 30 relatives of the crash victims have filed lawsuits against Boeing, alleging faults with the new model 737 MAX led to the deaths.

The preliminary crash report from Indonesia’s transport safety agency suggested that pilots struggled to control the plane’s anti-stalling system immediately before the crash.

Investigators also found that the Lion Air jet should have been grounded over a recurrent technical problem before its fatal journey, but did not pinpoint a cause of for the accident.

The planes cockpit voice recorder is yet to be found.

A final report is not likely to be filed until next year. – AFP