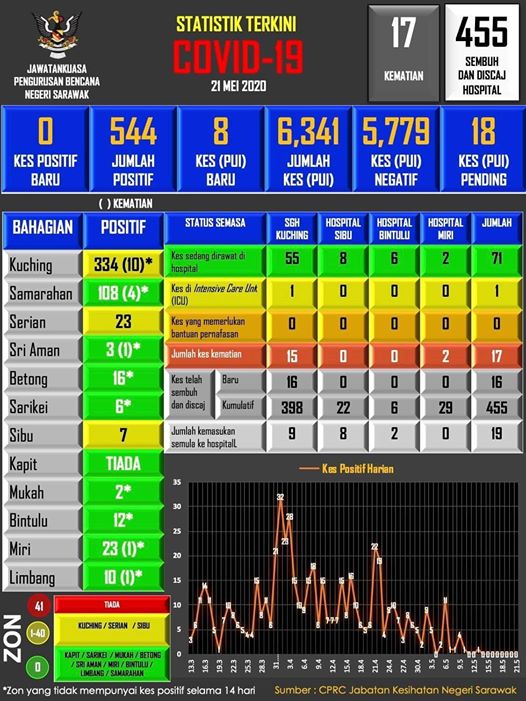 KUCHING: Lundu district is the latest to be declared a green zone as no new Covid-19 cases were reported in the district over the past 14 days.

The four yellow zones are Kuching, Tebedu, Sibu, and Serian.

Meanwhile, Sarawak recorded no new positive Covid-19 cases yesterday for the eighth consecutive day, with the total number of cases remaining at 544 since the first positive case was reported on March 13.

“A total of eight new person-under-investigation (PUI) cases were reported, and 18 cases are still awaiting laboratory results,” he said.

He said 16 cases had recovered and been discharged from the Sarawak General Hospital (SGH) yesterday, bringing the total number of recovered cases to 455 or 83.64 percent.

Another 71 cases were undergoing treatment at hospitals, with one in intensive care unit (ICU). Thus far, the virus has resulted in 17 deaths in the state.

Uggah, who is also SDMC chairman, said that the committee had coordinated the return of 8,448 students from Malaya, Sabah, and Labuan as of yesterday.

“As for quarantine centres, 61 have been opened, with a total of 3,837 individuals there,” he said.

He said that yesterday a total of 6,051 applications for inter-district movement were received at 28 district police headquarters throughout Sarawak, bringing the cumulative total to 49,623 applications.

He also said that 29,924 notifications on opening of economic sectors have been received. From this, 21,824 were received online and 8,100 via email.