She said those served with the compound notices under Section 92(1) of the Anti-Money Laundering and Anti-Terrorism Financing Act (AMLATFA) 2001 were given two weeks to return the money.

Latheefa said MACC had opened investigation papers on the 80 individuals and entities who received the notices so that they would take it seriously and pay up.

She said the individuals received as low as RM500,000 to as high as RM25 million, while the entities received up to RM134 million.

“It’s up to them to pay the fine, failing which, we will use the full authority of the powers that were given within the act to take the necessary action,” she told a press conference here today.

According to Latheefa, the entity that received the highest amount, RM134 million, was Solar Shine Sdn Bhd while for individuals, it was former CIMB chairman Datuk Seri Nazir Tun Razak, who received RM25.7 million. 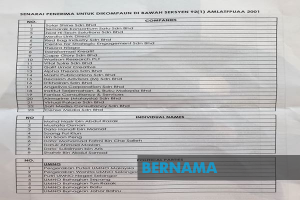 “They received it by cheques, that is why we are able to confirm the trail and tracking with conviction. We are very clear where the money is from,” she said.

Latheefa said the MACC had received consent to issue the compound notices from the Attorney General.

Asked whether two weeks was enough for them, Latheefa said: “They have to apply and ask for extension of time if not enough.”

Asked whether the list was exhaustive, Latheefa said: “No and there are more.”

Latheefa also said MACC had ‘taken out’ (from the list) those who had paid for actual charities and that would be dealt later on.

“So we have put in an order to freeze those accounts and then from then, within 12 months, we’ve decided to forfeit those monies when they are unable to explain where they got the monies from,” she said. – Bernama