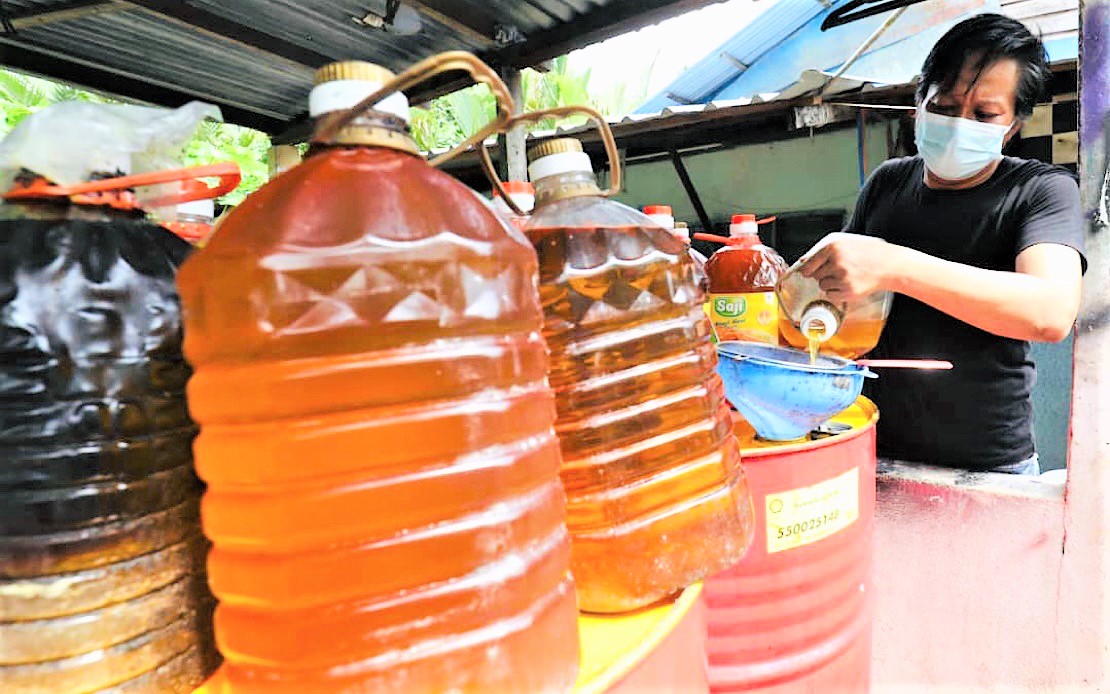 KUALA LUMPUR: When you are done with deep-frying meat, chicken or fish at home, hold on before pouring the used cooking oil down the sink.

Used cooking oil can be recycled to make soap, lubricants, candles, animal and pet feeds as well as renewable energy.

Mohd Rosdi Abu Bakar, 48, an electronic factory worker from Butterworth, picked up the trade of selling used cooking oil from friends, some of whom have gained a foothold in the business for the past 20 years.

“It has been six months since I started this business as a supplemental income. I usually collect the used cooking from my customers every Sunday,” he told Bernama when contacted recently.

To his pleasant surprise, Mohd Rosdi found that despite operating part time, his small enterprise has yield returns, bringing him a monthly income of RM3,000.

He said he collects about a tonne of used cooking oil monthly from his customers and resell them to Airil Global Resources, a company based in Kulim, Kedah.

“I personally went over to my customers’ house who wanted to sell their used cooking oil. So far, my customers are mostly housewives, restaurant operators as well as food and pasar malam traders,” he said, adding that they were mainly from Penang, Sungai Petani and Padang Serai, Kedah.

The father of five said he is confident that he would be able to provide a good life for his family, adding that his target is to secure 100 traders as his anchor customers.

The target will enable him to rake in a monthly income of up to RM9,000 and once this is realised, Mohd Rosdi said, he hopes to focus fully on the business.

There are many factors why many people are not aware of the benefits of used cooking oil. Among others are the lack of promotion and exposure to target groups such as housewives and operators of food outlets.

According to Senior Lecturer of Universiti Putra Malaysia (UPM)’s Faculty of Forestry and Environment, Dr Mohd Yusoff Ishak, the cheap purchase price of used cooking oil has made it unpalatable to the public.

“For example, the purchase price of used cooking oil which is offered at around RM1 per kg may not be attractive to the public. In addition, the support system and facilities for those who intend to venture into the business, are not up to the mark.

“This includes the lack of standardisation in terms of recycling operations which are still perceived as activities that are small and cheap in nature.

To ensure quality biodiesel, he said, there are standards for testing the fuel properly to see that it meets specifications for use. ASTM International (formerly known as American Society for Testing and Materials), an international standards and testing group, has a method to legally define biodiesel for use in diesel engines, labelled ASTM D6751.

“This is one of the reasons why not many industry players are bold enough to venture into this business in a transparent manner,” he told Bernama.

However, he said, the process of converting used cooking oil to biodiesel has now been made simpler with latest advances in technology, drawing new players to jump on the bandwagon.

Used cooking oil is one of the major sources of biodiesel.

According to Mohd Yusoff, used cooking oil is usually collected and filtered through several stages before going through a chemical process to be converted into fuel for vehicles or biodiesel.

“The used cooking oil is converted into biodiesel by the means of a chemical reaction called transesterification, which can be performed using a variety of catalysts including basic, acidic, and enzymatic. These catalysts can also be categorised as homogeneous or heterogeneous.

“The process of converting used cooking oil into biodiesel involves different levels of complexity, cost and energy consumption,” he said.

Meanwhile, research conducted by UPM has succeeded in turning cooking oil into biodiesel for use by heavy machinery and vehicles.

Mohd Yusoff said, a team of UPM researchers from the Faculty of Biotechnology and Biomolecular Sciences took about five years to produce the biodiesel.

“Diesel-run engine does not require modification in order to use biodiesel because only 10 per cent of biodiesel is needed to be mixed with 90 per cent of pure diesel (B10) before it can be used,” he said.

He said members of the public can sell their used cooking oil at a pilot plant at UPM Serdang campus for RM1 per kg.

“Generally, the processing of 100 litres of used cooking oil, which takes about six hours, will produce 90 litres of biodiesel and 10 litres of glycerol,” he said.

In creating awareness among the people, all parties should play their role in ensuring that used cooking oil is not poured into kitchen sinks and drains.

Oils that are poured down drains can clog up pipes, cause drains and sewers to stink from bacteria growth and interrupt wastewater treatment services.

Towards this end, NKH Bio Solution, a Bangi-based Bumiputera company which buys used cooking oil from the public, has launched a Trash to Cash awareness programme in collaboration with several joint management bodies (JMB).

“For the Trash to Cash programme, we have fixed a suitable date to collect the used oil from residents. The price of one kg of used cooking oil is RM2.50 and we pay direct to the residents,” he said.

The campaign is aimed at creating a better environment and healthier lifestyles for the public by providing the residents with a convenient way to dispose of the used cooking oil.

According to Rozaimi, the used cooking oil collected will be sold to certified contractors. The company collects about 140 tonnes of used cooking oil monthly, covering Selangor, Terengganu, Perlis, Penang and Johor.

He said all used cooking oil collected will be processed into biodiesel and exported to Europe, among others, the United Kingdom and France.

Rozaimi said the level of awareness among the people would greatly depend on the individual’s level of understanding on safe cooking oil consumption for the household.

“There is a higher sense of awareness among city dwellers who are more exposed to the campaign on the use of safe cooking oil consumption and recycling practices of used cooking oil for biodiesel.

“However, awareness among traders on safe consumption of cooking oil is rather low, either in urban or rural areas. This poses health risks to buyers who buy food that are fried or cooked with excess oil. Hence, such campaigns should be conducted among traders.

“Not all food handlers and consumers understand the roles they must play, such as adopting basic hygienic practices when buying, selling and preparing food to protect their health and that of the wider community,” he lamented. – Bernama