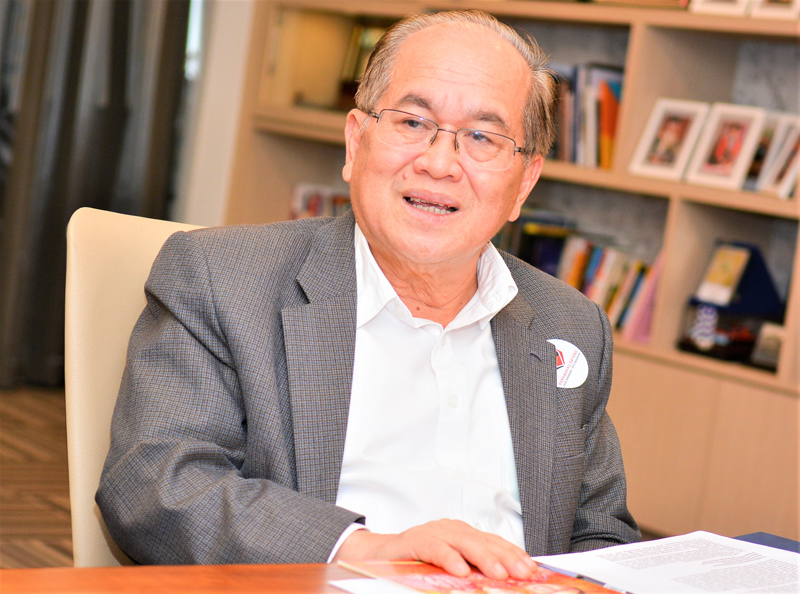 This mini convention follows the first one held in Miri on Sept 5. Despite the limited number of participants and delegates due to the Covid-19 pandemic, the PBB convention in Miri was a successful and effective event.

After the one in Betong tomorrow, the next in the series will be held in Sibu next month, followed by Kuching.

Deputy Chief Minister Datuk Amar Douglas Uggah Embas, who is also the organising chairman of the PBB mini convention in Betong, shared details of the event during a recent exclusive interview with New Sarawak Tribune.

New Sarawak Tribune: Instead of the usual style of PBB convention, a series of mini conventions are being held. Can you elaborate on this?

Uggah: Prior to the Covid-19 pandemic, we initially planned to hold the PBB convention in Kuching.

Due to the constraints of gathering and the number of people allowed to be present in accordance with the standard operating procedures (SOPs), we could not hold the convention in Kuching like before, when delegates from all 82 Sarawak constituencies would gather.

One of the constraints is that we cannot invite more than half of the capacity of the venue. So, we thought that if we organised the convention in Kuching alone, the number of invited delegates would have to be much less than usual. Previously, we would always invite at least 5,000 to attend the full convention at Borneo Convention Centre Kuching (BCCK) here.

However, we still need to hold the convention, so that is why our chief minister thought of a way to do so which would suit the current circumstances.

Therefore, the convention was divided into four zones — Miri, Sibu, Betong and Kuching.

Based on our experience with the Miri mini convention recently, we can see that mini conventions have their own benefits as well. More locals can attend the mini conventions and greater focus can be given to local problems, be it in terms of the proposals raised or papers presented.

With this, we hope we will be able to meet the PBB delegates.

What is the objective of the Betong mini convention?

Like the PBB mini convention in Miri, this is an opportunity for our PBB president, Abang Johari, to deliver a message to the party members. This is a message on the direction of the party and challenges faced, as well as calling party members to be prepared to face the future of PBB in Sarawak.

Who are the delegates attending the Betong mini convention?

Some may consider these conventions as preparations to face the coming Sarawak state election.

They can make various predictions as to why we are doing this. However, this is a way for us to strengthen the party machinery by delivering messages to PBB members.

If you take a look at the working papers presented at the mini convention, the topics are on the many development programmes carried out in all these constituencies such as roads, bridges, water and power supplies, agricultural projects and others.

In this way, the people will know what has been done by the Gabungan Parti Sarawak (GPS) government in the  respective areas.

Besides providing explanations on such policies and topics at the Betong mini convention, we will also have briefings on election procedures — the dos and the donts — as guides for party members.

Can you elaborate on the programmes planned for this convention in Betong?

At this one-day convention, which begins at 8am,   two working papers will be presented on development in the Sri Aman and Betong divisions.

Assistant Minister of Infrastructure and Ports Development Datuk Julaihi Narawi will start off by presenting a paper on infrastructure development, followed by Utilities Minister Datuk Seri Dr Stephen Rundi Utom who will speak about electrical infrastructure and water supply. After that, Julaihi will present the proposals made to our chief minister.

At 10am, our chief minister will officiate at the opening ceremony. After lunch, he will visit projects in nearby areas.

In the afternoon, a working paper on entrepreneurial development will be presented by Entrepreneur Development and Cooperatives Minister Datuk Seri Dr Wan Junaidi Tuanku Jaafar.

A paper on land matters will also be presented at the convention to ensure that the rights of the people on land are protected. The last paper will be an election briefing for PBB election officers in the Betong zone.

Are there any proposals which will be put forward based on the conclusions from the papers?

There are proposals which will be discussed in the morning.The resolutions will be presented at the opening ceremony.

Are there any changes which will be made based on the convention in Miri?

We did not face any problems for the Miri convention, so the Betong convention will follow what was done in Miri.

What is the theme for this convention and how is it relevant, especially in the context of Betong?

Hak Sarawak Diutamakan — this is an important struggle for PBB, the struggle for our rights enshrined in the Malaysia Agreement 1963 (MA63) and Inter-Governmental Committee (IGC) Report which may have been eroded or lost either intentionally or unintentionally. These rights must be returned.

At the Betong convention, we will inform delegates that one of PBB’s successes in fighting for the rights of Sarawak is the payment of RM2.9 billion state sales tax (SST) by Petroliam Nasional Berhad (Petronas).

This is the result of our struggle to ensure that our Oil Mining Ordinance (OMO) 1958 is recognised and our right to implement SST is accepted.

Secondly, on pembangunan, this development is our struggle to upgrade the lives of our people to be better than before. One of our focuses is road infrastructure. We will  have  the Second Trunk Road, passing through a number of the constituencies mentioned.There will be   several bridges such as at Batang Lupar, Batang Krian, and Batang Saribas.

While we develop the infrastructures and amenities, we also focus on how to improve the people’s standard of living, livelihood and income.

This area is a food basket area, established from Betong to Sarikei and until Mukah. We have the Bukit Sadok Agropolitan area as well. In the Sebuyau area, we have the Integrated Regional Samarahan Development Agency (IRSDA) while Sri Aman has the Sri Aman Development Area (Sada). Each of these regional agencies is tasked to develop areas, specifically focusing on economic activities.

In  Betong,  the government, too, has planned for the Bebuling STOLport ( short landing and takeoff) in Spaoh to airfreight farm products fresh to the markets.

This convention will see delegates from quite a vast area. What are some of the achievements and accomplishments in this vast area which the state government can be proud of?

As I have mentioned, we are going to have the Second Trunk Road — this is one of the projects we are very proud of. We also have the construction of the two bridges at Batang Lupar — one from Sebuyau to Betong and the other from Sebuyau to Maludam — as well as the Batang Saribas Bridge.

This means that in about four or five years, commuters from Kuching will not have to use ferries because all these bridges will be completed.

In addition, what is much anticipated by the people is economic and land development, referring to the food basket area. The Drainage and Irrigation Department (DID) has made plans to upgrade the peat lands there so that they can be used for farming. The state is committed to becoming a net exporter of food products by 2030.

Besides this, there is also IT development because the communities in villages and longhouses really appreciate the importance of digital economy, especially during this Covid-19 pandemic. So coverage is also very much anticipated by the people, which is why our chief minister will be officiating at the launch of a telecommunications tower in Luban Ulu, Spaoh.

As deputy chief minister and PBB deputy president, can you describe the style of Abang Johari’s leadership in the party?

Our chief minister is a leader for all — all people, all races and all religions. This is clearly seen through the various development projects as well as his financial support for race-based NGOs such as the Dayak Cultural Foundation, Malay Cultural Foundation, DBNA, DCCI and the various houses of worship under Unifor (the Unit for Other Religions).

Therefore nobody can deny that he is chief minister for all.

What are your hopes for the participants and delegates of this convention?

My expectation is that the delegates will have better knowledge of the many government development policies and programmes and their implementation. They, too, are expected to be able to explain the policies of PBB and GPS on development within their areas with the hope they will pass on the information to others. Such information will allow our members to rebut the political propagandas of the opposition.

Our first and foremost mission is to convince Sarawakians that only the GPS can be trusted to rule Sarawak. Only the GPS has experienced leaders, concrete programmes to develop the state. Only the GPS understands Sarawak.