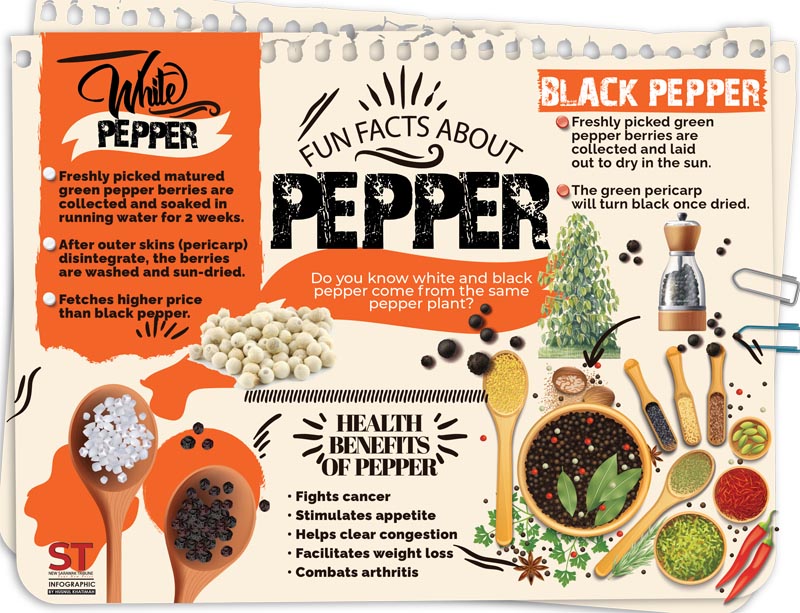 KUCHING: The Ministry of Plantation Industries and Commodities has set its eyes on increasing pepper prices in the country.

Its deputy minister Willie Mongin said the ministry was aiming to increase pepper prices up to RM10 per kg for black pepper.

“We have our target, but commodities such as this depend on global prices, supplies, and demands. To increase the price to RM10 per kg will require efforts from all exporting countries and not only Malaysia.

“This is the economic circle. It’s about supply and demand. I am not giving false hope to our smallholders as we can see that the downstream product prices are really good.”

Willie said the current pepper prices per kg at RM8 for black pepper, RM15 for white pepper, and RM25 for creamy white pepper had experienced an increase of RM1 to RM2 due to certain policies of the government.

He added that these policies included encouraging production of pepper in addition to providing an added value to pepper as well as purchasing methods.

“… and due to these government policies, we are able to discuss with other exporting countries where they are able to reduce their exports in order to stabilise the global market price.”

He said the ministry had directed the Malaysian Pepper Board (MPB) to whitelist active pepper smallholders in the country.

“It’s learnt that there are some 30,000 pepper smallholders in Sarawak and Johor with an acreage of 7,000.

“But there are some who are no longer cultivating pepper on the land,” he said, adding that there were no current and latest statistics on the amount of pepper smallholders in the country.

Willie explained that the lack of statistics had affected the government’s effort to provide assistance to the target  groups such as pepper smallholders.

“For example, when the government provides agriculture input assistance to pepper planters, it will also reach the hands of those who are no longer working on their pepper farms.”

Meanwhile, Willie said a law to prevent mixing of imported and local pepper would  be gazetted in the Malaysian Pepper Board Act.

“We are plagued with a problem where imported pepper   mixed together with Sarawak pepper is claimed to be fully Sarawak pepper, thus affecting  the quality.

“We want to protect our pepper quality so that it is 100 percent Sarawak pepper. This will surely increase the demands for local pepper.”