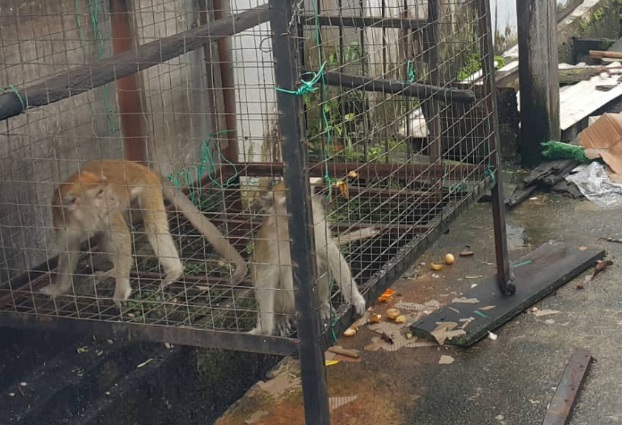 MIRI: Two long-tailed macaques were rescued from their captors yesterday, which should see them having a second chance at living naturally – or at life rather.

Their rescuers are not sure why the two macaques – a mother and her child – were kept in captivity. Were they being kept as pets? Or perhaps they were meant for some exotic dinner table somewhere?

Whatever the reasons are irrelevant now because their rescue means the law will take precedence.

“Once we’ve gathered the information, we will send the investigation papers to the State Attorney General (SAG) who will decide whether or not to prosecute the case in court and take action against the owners,” he said.

The spokesman said it had yet to be ascertained whether the owners caught the animals or bought them from somebody, or as to the purpose of having them in their possession.

“Although they surrendered the macaques, it doesn’t mean they can run away from the law,” he pointed out.

Sarawak has a long list of protected animals and the long-tailed macaque is one.

But how many are aware of the Wild Life Protection Ordinance, 1998 that gives protected species like this the right to live as they should?

Keeping protected animals in captivity without a licence is, needless to say, illegal.

But the law aside, keeping the mother and child macaques exposed to the sun and rain is animal cruelty to any animal lover, which was why this particular case was reported to the authority.

Wildlife rangers moved in on the house at Taman Tunku, Miri, following a report received earlier in the day.

The complainant who wished to remain anonymous expressed her exasperation saying:  “Such protected wildlife must never be allowed to be kept as pets under such cruel conditions. They were kept in a small cage and exposed to the hot sun.”

She said if there is a licence to keep the macaques under such circumstances, then every house in Miri will just buy the macaques from illegal trappers and there will be no end to this wildlife trading.

“They (illegal owners) must be prosecuted,” the complainant said.

Meanwhile, it is understood that the macaques are to be released back to the wild.

If they are in bad health, they will have be treated and rehabilitated first.

A realisation of Sarawak dream

No new cases in Sarawak

DBKU urged to work with other agencies