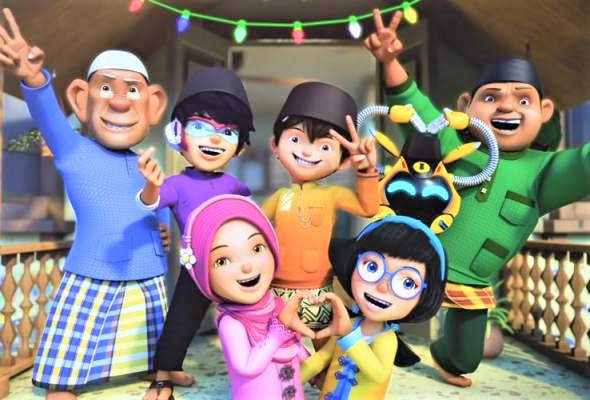 KUALA LUMPUR: Monsta’s 2021 Hari Raya-themed advertisement called ”Memori Eidulfitri’, which was uploaded on several official YouTube accounts of Monsta and BoBoiBoy (Monsta is the producer of popular fictional animation series BoBoiBoy) on May 7, managed to collect the highest organic views on YouTube, putting it in first place in the collection of Raya advertisements for 2021.

The four-and-a-half minute Memori Eidulfitri advertisement features scenes of the BoBoiBoy family generation on the morning of Syawal, in three different time periods.

It recounts the journey of Amato (Mechamato; who is BoBoiBoy’s father) as a teenager; then Amato with his young son BoBoiBoy; followed by BoBoiBoy as a teenager in the present day who lives with his grandfather.

In a statement today, Monsta head of brand and international sales, Faiz Zainal Aabidin said the advertisement had a great impact on viewers who were going through a similar situation in the Covid-19 pandemic situation which now makes it more difficult to meet family members and relatives.

“On average, the audience was touched and relieved to see the memories of BoBoiBoy with his father Amato, and also felt the sadness of BoBoiBoy who missed his parents after years of not meeting them face-to-face.

“This year’s advertisement is indirectly a special gift from Monsta to their fans for their constant support to the local animated series BoBoiBoy and Mechamato,” he said.

Monsta featured a twist in this year’s advertisement with the appearance of two new main female characters namely BoBoiBoy’s grandmother Umi, and also a mystery woman in a blue robe who is said to be BoBoiBoy’s mother.

Meanwhile, on the site Twitter, the #MemoriEidulfitri and #BoBoiBoy managed to enter the “trending” material in Malaysia and Indonesia, one-and-a-half hours after the official release of the video.

The advertisement has also received extensive coverage from local media groups such as Bernama, Malaysiakini, Harian Metro, Astro Awani, Siakap Keli and many more. It will also be aired on local television stations TV3 and Astro Ceria, as well as on Indonesian television station RTV during the Hari Raya Aidilfitri celebrations.

Through the nostalgic scene in this Memori Eidulfitri advertisement, the audience can also get to know more about Amato and a Power Sphera robot belonging to him called MechaBot.

Monsta is an intellectual property company that has produced a variety of animated series, films and consumer products in over a decade. – Bernama

By appointment only at Maybank from June 2