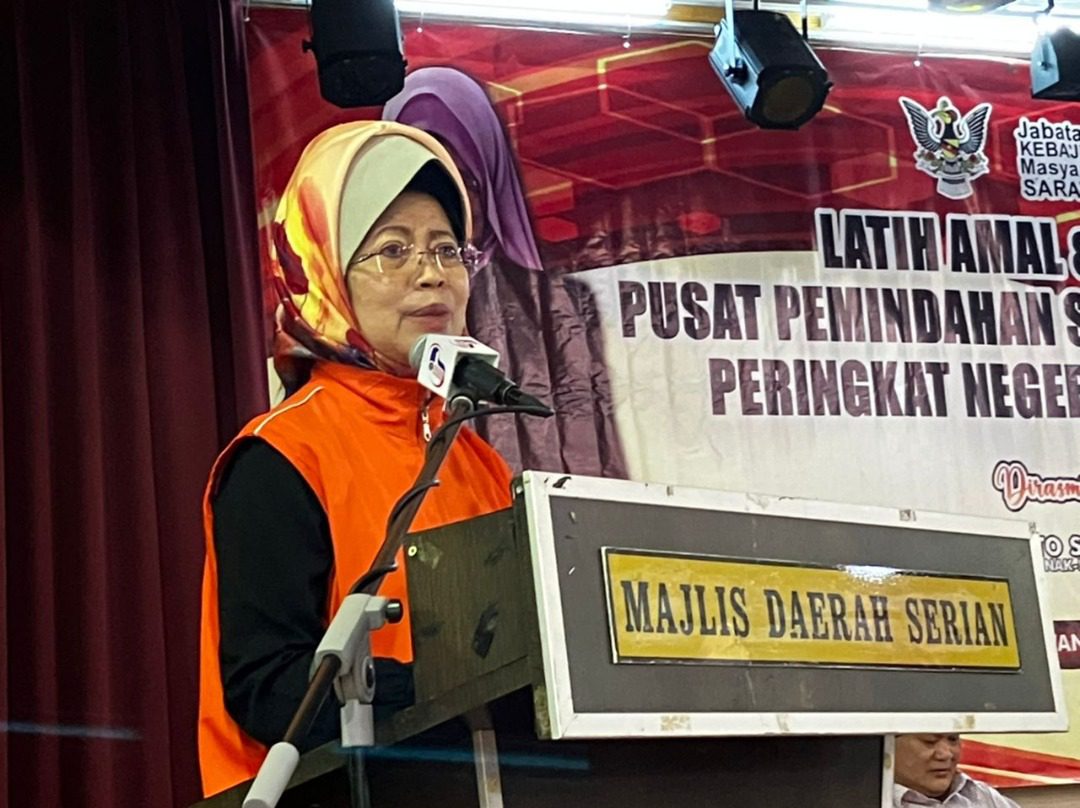 KUCHING: The Sarawak Social Welfare Department (JKMS) is ready to activate more temporary evacuation centres (PPS) in view of the expected year-end flood in the state.

Women, Early Community Wellbeing Development Minister Datuk Seri Fatimah Abdullah said that it will not be a problem if new PPS is needed in addition to the 627 PPS that has been gazetted earlier.

“If there is an unexpected flood where flood disaster never occurred, a location would be used as a PPS at the particular time of which is outside of the earlier PPS that has been gazetted,” she said.

She told reporters after officiating at the Sarawak Disaster PPS Training and Simulation Programme 2022 the Ranchan Multipurpose Hall in Serian today.

“In addition, DO cannot take days off during the flood period. They have to be on standby. This is because we need to be more so if there is any unexpected flood situation,” she said.

Earlier, in her speech, Fatimah said there are 627 PPS across the state ready to be reactivated, and its capacity can accommodate up to 162,091 flood victims.

“In addition, there are also 25 forward bases to store dry foods and the food will be distributed faster to places particularly in the rural areas that are unreachable by road,” she said.

She also said a total of 206 suppliers have been appointed to supply goods needed by victims during flood disasters.

“In terms of assets, JKMS has 48 vehicles that can be used for disaster operations, 10,000 collapsible tents and 272 mobile partitions,” she said, while adding that JKMS has one large-scale Disaster Storage Depo, three mini depo and 16 disaster stores at the Divisional and District Welfare Offices.

Apart from that, she said a total of 1,971 JKM staff and volunteers have prepared to be mobilised in the event of a flood disaster in Sarawak.

She said meanwhile a total of 285 people consisting of counseling officers and the psychological support team will help disaster victims who are emotionally affected by the flood disaster.
On another note, Fatimah reminded the public not to set up their own temporary shelter in the event of a flood disaster.

“There are certain standard operating procedures (SOPs) that need to be followed when it comes to setting up the PPS,” she said.

Meanwhile, according to the Malaysian Meteorological Department’s (MET Malaysia) report, the transition phase of the monsoon begins from the end of September until November.

MET Malaysia expects the Northeast Monsoon to begin in November 2022 to March 2023. Kelantan, Terengganu and Pahang are expected to experience heavy monsoon rains from November to December 2022.

Johor, Sabah and Sarawak are expected to experience heavy monsoon rains from December this year to January next year. 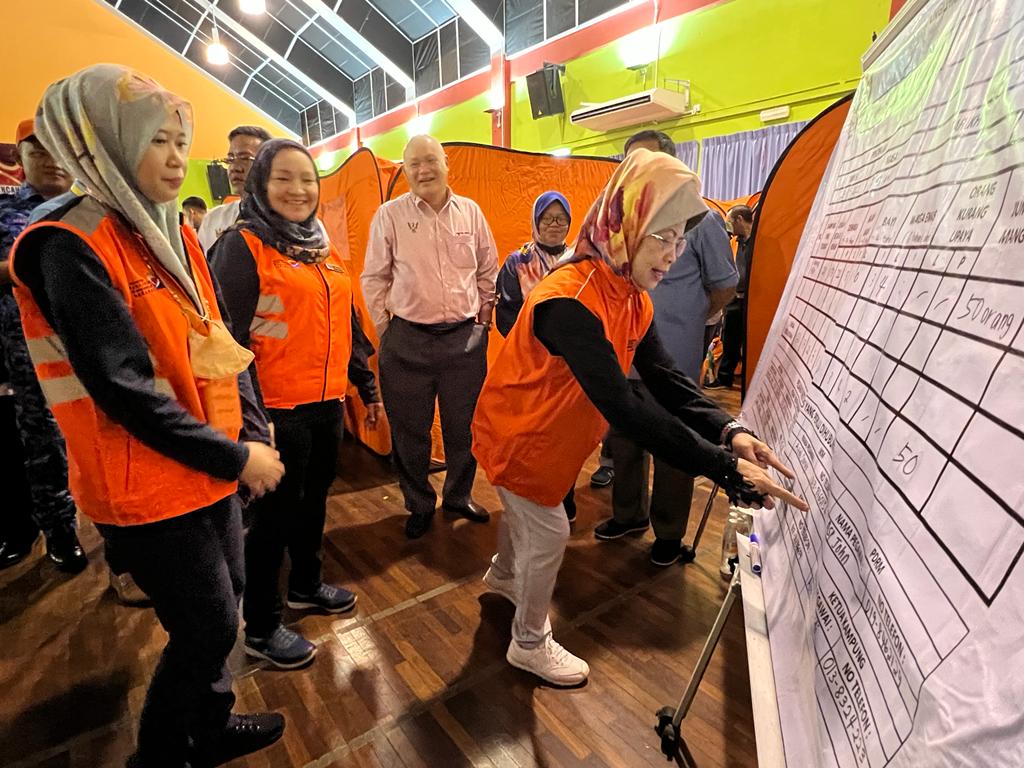 Fatimah looks at the noticeboard that is used for recording and tracking the number of flood victims. 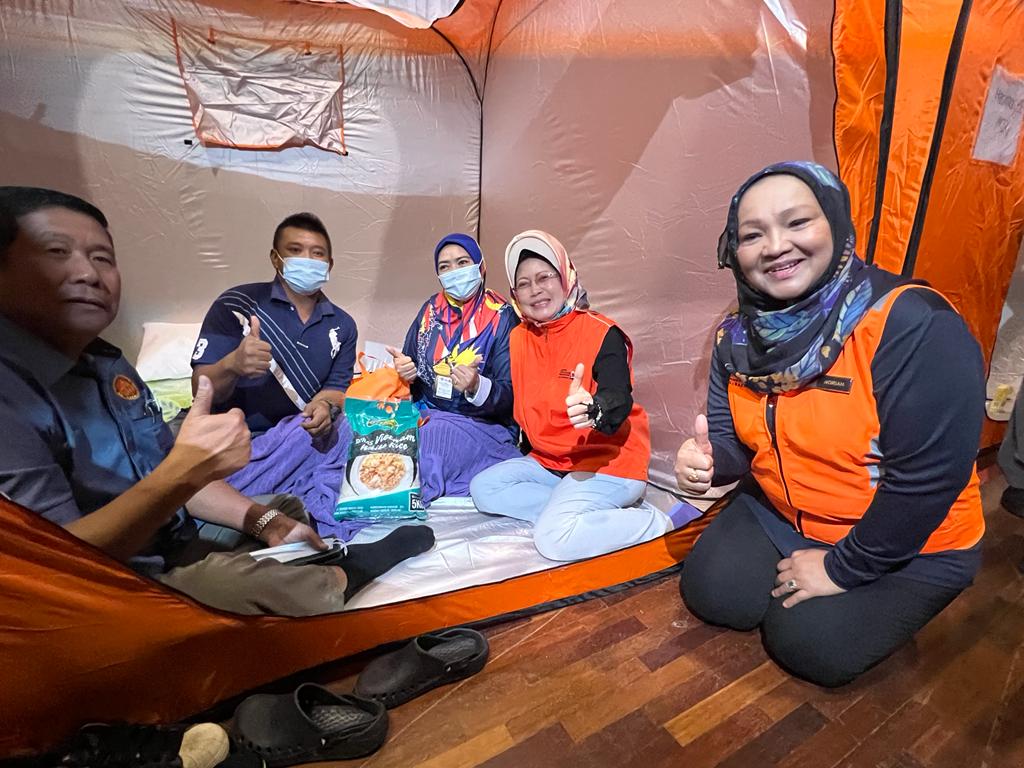 Fatimah poses for a photo during the Sarawak Disaster PPS Training and Simulation Programme 2022.