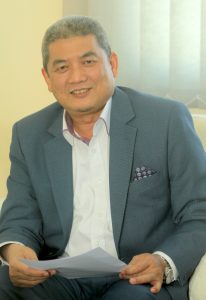 Instead, what we are looking at is collaborations. There are a lot of other companies which have land banks. In many cases they have spent too much on this and they do not have much cash to develop the property. This is where we come in and work out a collaborative arrangement. In fact, at the moment we are in the process of discussion and negotiation with a few parties with land banks.

Give us at least two or three more months from now. Then we will be firming up a final approach and agreement before we move to make this initiative a reality.

Is SCIB going into residential, commercial, or industrial property development?

I would say all of that. However, currently I would say that industrial property development will still be a priority as the residential property market is already very saturated.

There is still a requirement for industrial asset development.

Have any projects been identified so far?

There are a few which we are still discussing and negotiating. Once it is firmed up and we declare it to Bursa first, then we will announce it to the public.

Are some of these projects in Sarawak?

Sarawak, of course, is one of the states. Among all the states in Malaysia, I would say that Sarawak in the coming three years is still one of the most bullish, especially when state elections will be happening soon and developments are one of the key things the local government will be looking at.

SCIB’s products are in good demand, especially with the implementation of mega infrastructure projects like the Pan Borneo Highway, Sarawak Coastal Road, the upcoming Sarawak Trunk Road and Sarawak Water Grid Programme, as well as the upgrading of dilapidated schools which are using IBS components.

However, SCIB has not been making much profit or even suffered losses in recent years despite achieving revenue growth. Has the new management identified the weaknesses, if any, in the company’s project management or procurement?

In the last quarter’s results that have been announced to Bursa, there is still a very small negative figure there — making a very small loss. I am very sure that in this coming quarter, it should be making a profit. Moving forward, we will make sure that the company will continue making profits.

We have looked into the workforce that exists against the prospects and they do not really match. Normally, there would be two ways to address this. Either you cut down the workforce and run in a leaner manner, or you maintain it but you look at a wider scope of prospects and potential.

Our culture, however, is that when we come to a company, we will never reduce the manpower. It is a very sensitive issue and also a very sad thing to do as every employee has a family to take care of and they have many commitments such as house loans, car loans, and so on.

At SCIB, we see that this pool of work resources can move to a lot of other areas and diversify instead.

We have actually started that. We have got some fuel service civil construction jobs so we are identifying some of the disciplines of the people here to move them to tap into these new areas. Things will progress from there. There have been no reductions in the workforce. In fact, we are actually looking at new recruitments because of the new contracts that we have secured.

On geographical expansion, what does SCIB’s new management have in mind?

I believe that the new management of SCIB led by Rosland Othman (managing director and chief executive officer) will definitely follow the footsteps of SDHB and what it has established.

SDHB over the past 26 years has, as of now, made its mark in 21 countries globally. We select countries which have a good rating, meaning when you carry out a job you will get paid — that is very important.

The management team has started this already, securing some medium-sized contracts in Indonesia, Qatar, Oman, and Peninsular Malaysia. Meanwhile, the ongoing local businesses will be continued.

And of course, we are also participating and looking at a lot of other civil construction-related projects here in Sarawak.

Will you be concentrating overseas, in Peninsular Malaysia, or Sarawak?

We always believe that geographical positioning and coverage is very important for the sustainability of a company. For instance, in the context of states in the Federation of Malaysia, there are some states which are very wealthy because of natural resources, developments, and so on. As an example, Johor is opening up a lot of opportunities, especially with RAPID (Refinery and Petrochemical Integrated Development). RAPID actually becomes a catalyst for other developments to come in, such as housing, industrial plants, logistics, and more.

SCIB has created its reputation in Sarawak. At the moment, I would say that almost 100 percent of SCIB’s revenue comes from Sarawak. If we can have another facility set up in another state which has shown good growth, we can easily double up.

We are looking into other locations in other parts of the world where the country has a good rating, and we will do the same thing.

From there, we can potentially expand out of Sarawak to other satellite operations in any part of the world. It is the same expertise and technology which you can rebuild in another location. Then, the company can grow.

In view of the current existing political situation in Peninsular Malaysia, will that have any bearing on your foray into the states there?

As an entrepreneur, we give very high due respect to the respective local government in power.

We are not politicians and we do not want to encroach into the political aspect. We are entrepreneurs — we come in to provide feasible business proposals. If we want to develop in certain locations, then we have to collaborate with the authority in charge there.

On possible strategic investments or acquisitions, would you be in the oil and gas (O&G) industry to tap into the business opportunities in store when Petroleum Sarawak (Petros) commences oil exploration works?

Well, I would say that the industry players recognise that O&G is still the best option as a source of energy at the moment.

There are a lot of other initiatives, however, such as renewable technology and hybrid technology which combines all these different renewable approaches.

Personally, I still believe that O&G is still a source of income that SCIB needs to look into for at least the next 20 years.

SCIB’s manufacturing factory in Bintawa here has reached maximum operation capacity and although there have been plans to relocate the plant to a bigger site in recent years, this has not materialised. Is the new management taking a look at this?

Sure, our chief executive officer has gone down to the ground and met up with the people there. Some of them have been with SCIB for over 25 years, they know the ins and outs of the company and the equipment very well.

Our conclusion is the first thing we need to do is improve the existing equipment. These need to be reconditioned or rejuvenated, or new equipment technology can be looked into as these can replace the existing ones to improve production.

We do not have intentions to expand further based on a few factors such as the feed stock — the material used to produce the end product. Here in Sarawak it is slightly higher compared to other states in Malaysia and other parts of the world.

As we have mentioned, we are looking at other location to establish the same capabilities as what SCIB has, and we would rather have that be done in other places because it will also tap into bigger job opportunities. This means we want to optimise capital expenditure so that it can generate better income for the company.

We are yet to finalise the figure because we are still trying to find out the price of the latest equipment required to do what the existing plant needs to do.

One of the key challenges faced by SCIB is rising production costs as the prices of raw materials, like quarry stones, have surged due to the acute shortage in view of the high demand from several major infrastructure projects.

Would SCIB consider acquiring quarry land as a long-term solution to address the shortage?

The option is on the table. We are discussing our options but we have not decided yet. What you have mentioned is a reality and it is a challenge for SCIB’s management team. How we can maintain the profitability while competing with other providers using other available options. We need to look into this.

As SCIB is a listed company, what are some aspects that need to be considered?

When I entered into a public listing environment with SDHB, it taught me a lot of things. As I always say — every day is a learning day.

From that, I learned what is required so that a listing entity can be recognised and accepted, which in turn would attract more investors to enter and become part of the shareholders.

First, the customer is key. When we provide a service, we have to look into what the customer wants. Meeting the customer’s expectations has to be the top priority in our daily actions.

Second, you have to consider the stakeholders. These can be the shareholders, the lenders, and it can also be other investors who want to tap into your company value and they may exit by selling after that.

The third aspect is the employees. Employers with good leadership would put employees as one of the top priorities. Without the staff, the company cannot really provide services to the customers.

Thus, we have to take care of this so that our workers are highly motivated and they will really give their best productivity to grow the company together. Of course, governance is also very important. Once you can properly manage these key aspects, trust can be gained and people will come in to support the company.

O&G still worth investing in

Rains are here to stay?

Yes to elderly politicians stepping down