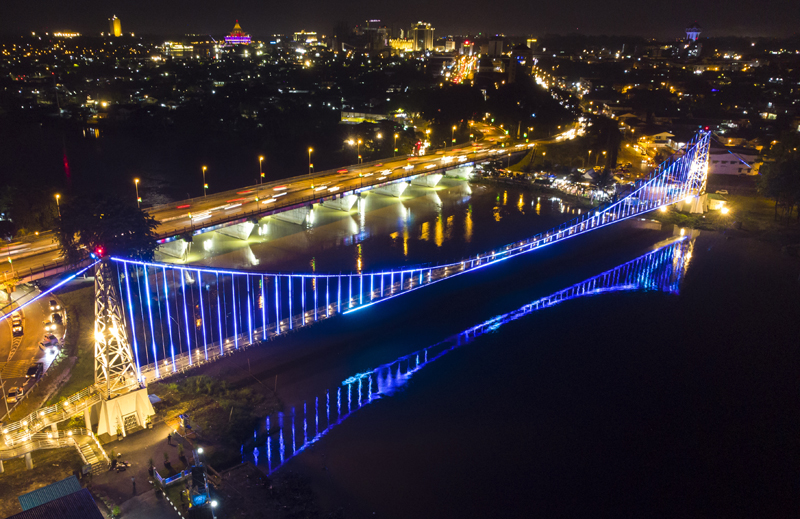 In pointing this out, Minister in the Prime Minister’s Department (Parliament and Law), Datuk Seri Wan Junaidi Tuanku Jaafar said the transformation of Satok constituency during the tenure of Abang Johari as assemblyman was there for all to see.

“The new Satok Suspension Bridge has just been completed. I have many sweet memories of this place (the suspension bridge). This was where I often played in my childhood.

“As a local, I am very happy with the changes and developments here during the reign of the chief minister. I congratulate you on this development and thank you,” he said in a Facebook post on Saturday night (Nov 20).

The first Satok bridge that was built during the Rajah Brooke era was closed to the public in 1992. Suspended 18 metres from the Sarawak River, it was constructed in 1923 and completed in 1926.

Following the bridge’s collapse due to a storm in 2004, the state government decided to rebuild it in 2017.

The construction of the 213-metre bridge, supervised by state Public Works Department (JKR), started on Sept 19 that year.

It was supposed to be completed on Sept 18, 2019 but JKR discovered that one of the main pillars on the Kubah Ria side had tilted. Work soon began to rectify the defect and the iconic bridge has now been certified safe for public use.

A favourite rendezvous for lovers back in the day, the main function of the bridge was to carry water pipelines from the reservoir at the foot of Mount Matang across Sarawak river to consumers in Kuching Proper.