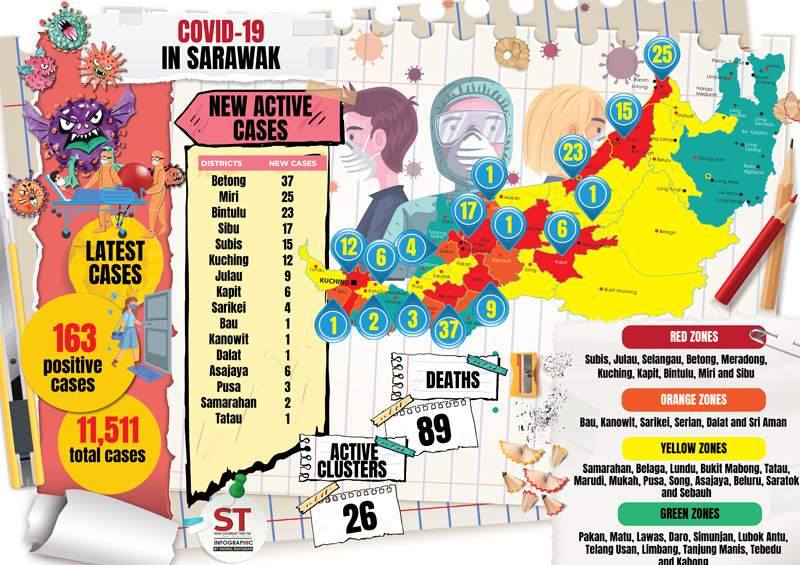 KUCHING: The Covid-19 death toll in Sarawak today increased to 89 after one death was recorded in Mukah.

The State Disaster Management Committee (SDMC), in a statement today, said the 89th death case involved a 83-year-old local woman who was admitted to Mukah Hospital in an unconscious state.

She was announced dead on March 2 and her reverse transcription-polymerase chain reaction (rT-PCR) test came back positive Covid-19 on March 3.

The case had comorbidities such as high blood pressure and dyslipidemia and was reported to be a close contact with a case from the Buloh Cluster in Selangau.

SDMC extended its condolences to the family members of the victim.

Meanwhile, the committee said 163 positive Covid-19 cases were detected in the state today, bringing the total number of cases statewide to 11,511.

It added that 210 new cases had recovered and were allowed to be discharged.

“Sixty-nine patients were discharged from Sibu Hospital, 66 from Covid-19 treatment and quarantine centres (PKRC) in Betong, 30 from Bintulu Hospital, 16 from Sarawak General Hospital, 11 from Sarikei Hospital, eight from PKRC under Kapit Hospital, seven from Miri Hospital and three from PKRC Sri Aman.