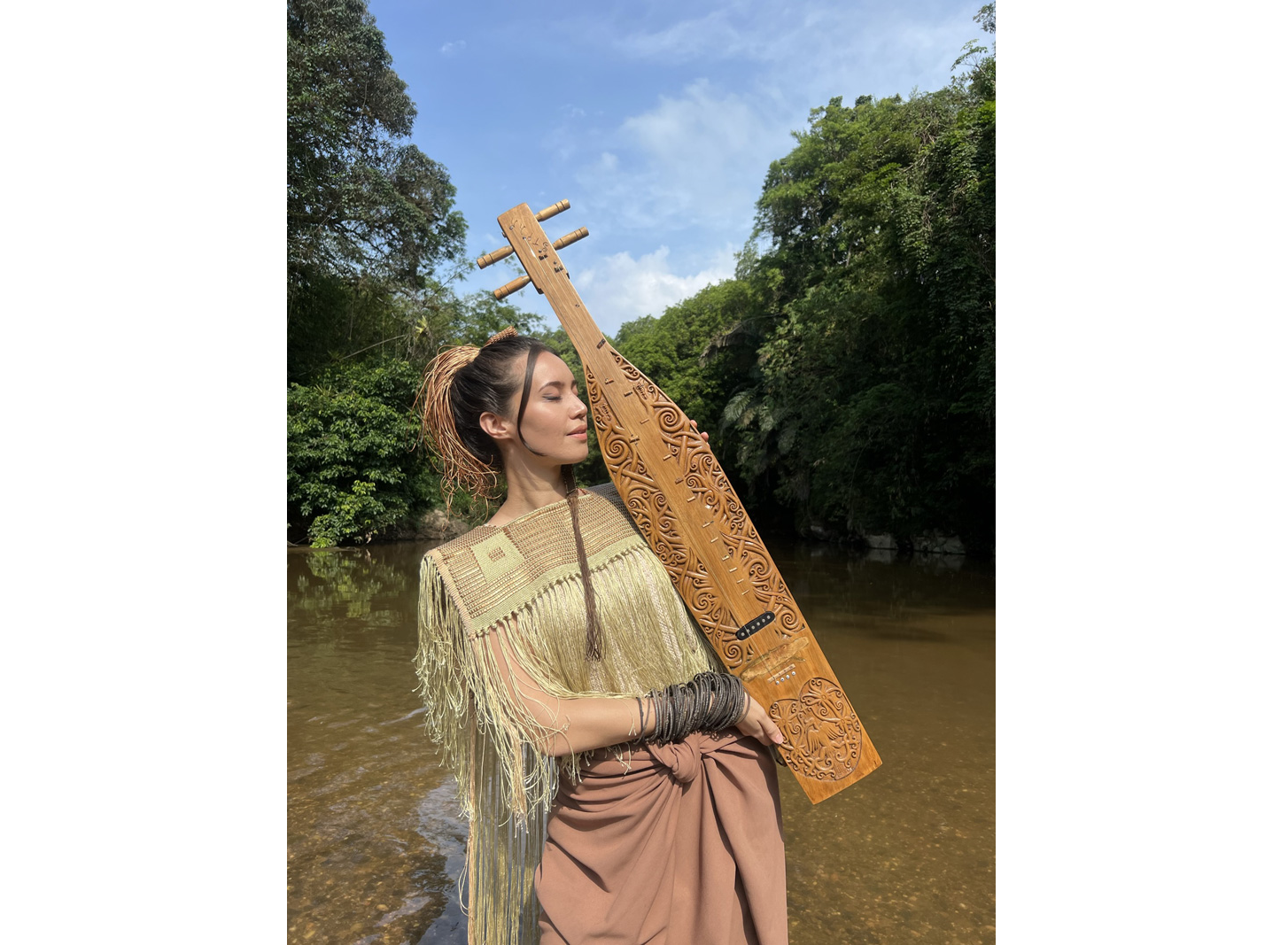 The video, which was impressively produced by her team, is one of her success stories. The entire video, from the music to the dancing and costumes, is inspired by Borneo’s many cultures, particularly those of Sarawak.

A lot of attention seemed to be given to the styling of this beautiful folk singer who has garnered international awards for her previous music videos.

The fashion and styling

Styled by Saerah Ridzuan of Styllar, who has previously worked with Alena, all the fashion elements are enriched by fusing the modern with the traditional in an honourable and beautiful way.

“Put Burui” is a short film and music video based on the traditional Kenyah song used for the women’s hornbill dance. While the dance moves play a big part in the music video, ferns were used to adorn the dancers’ hands instead of the traditional hornbill feathers (kirip of dancing feathers) in an effort to draw attention to the conservation of biodiversity. The green ferns did, in fact, draw a lot of attention.

Most of Alena’s outfits in the music video are made of natural fibres in order to be environmentally friendly, including the red pua kumbu (Iban handwoven textile from natural fibres and natural dyes) top from Sarawakian eco-fibre fashion and textile designer Edric Ong and a light brown top that was made by the Artisans of Tanoti using Sarawak songket techniques. The outfits used by the dancers are entirely made of plant fibres.

Her accessories in the music video are made out of seeds and shells by Edric Ong and another Sarawakian Nasha Prive, as well as orang asli Temuan artist Leny Maknoh.

Saerah said, “The aesthetics for ‘Purut Burui’ were mostly inspired by mother nature. The music video’s earthy colour palette featured shades of brown similar to the man-made nest, textured rocks, and sand by the river.”

Alena and the dancers wore accessories and clothing made of raw and organic materials such as hemp, bemban, dalai beads, and wood.

Alena looks stunning in two looks, one in white, which indicates purity (of nature’s innocence), and the other in red, which represents nature’s ferocity for survival, a colour that represents strength and power.

A team of Sarawakian youth successfully directed the music video, which was co-produced by Zass Puravida and Kanid Studio under the direction of Daphne Charmain Thian.

Speaking on the release of the music video, she said, “I was very nervous (as a first-time director). I had all these visions in my head. But I know that executing them would be different. It was a huge learning curve and I had to improvise and solve problems on the spot. There was a point where I had to step away to think about how to solve an issue due to the weather. It was challenging. Would I do it again? Yes, definitely.

“I wanted to depict Mother Nature in a way that seemed like we were watching a nature documentary. We are the audience observing her in her own realm. How she’s thriving without us on her own. She doesn’t need us, but we need her.”

The importance of providing the youth with an opportunity to express their creativity and love for the arts is important to Alena, and this was supported by the Ministry of Tourism, Creative Industries, and Performing Arts, which is also one of the funders for the music video.

Alena, a Dayak Kelabit descendent, has incessantly shared the stories of her ancestors through her sape music and art, so it seemed only fitting to release the music video on a day that acknowledges the contributions that indigenous people have made to the world as we know it.

Speaking on the release of the “Put Burui” music video, Alena said, “Indigenous peoples all over the world still have a very close relationship with the natural environment. Growing up learning the sape and our cultural art forms of the Kelabit and Kenyah people taught me about how our rainforest, rivers, and skies provide us with so much. Not only do we inherit music, language, and art, but we also inherit nature, which we must preserve as an heirloom.”

The track itself is from Alena’s most recent album, Sky Songs (2021). It was produced by Joshua Maran and features Niko Coyez’s incredible flute playing along with Alena playing the sape.

The music video, influenced by the lessons taught by her Dayak ancestors, depicts how similar Orang Ulu music and art are to the rainforest and rivers. The music video was filmed in Semadang, Sarawak.

Surrounded by the subject of the environment, Alena also collaborated with Bogus Merchandise to produce silk screen T-shirts by hand as merchandise for the music video, using second hand T-shirts that she hand-picked. “Put Burui” merchandise is now available for purchase on the Bogus Merchandise website (www.bogusmerchandise.com).

Watch the music video on YouTube (https://youtu.be/z9gEg9U-wNo) and listen to the song on most major digital platforms.