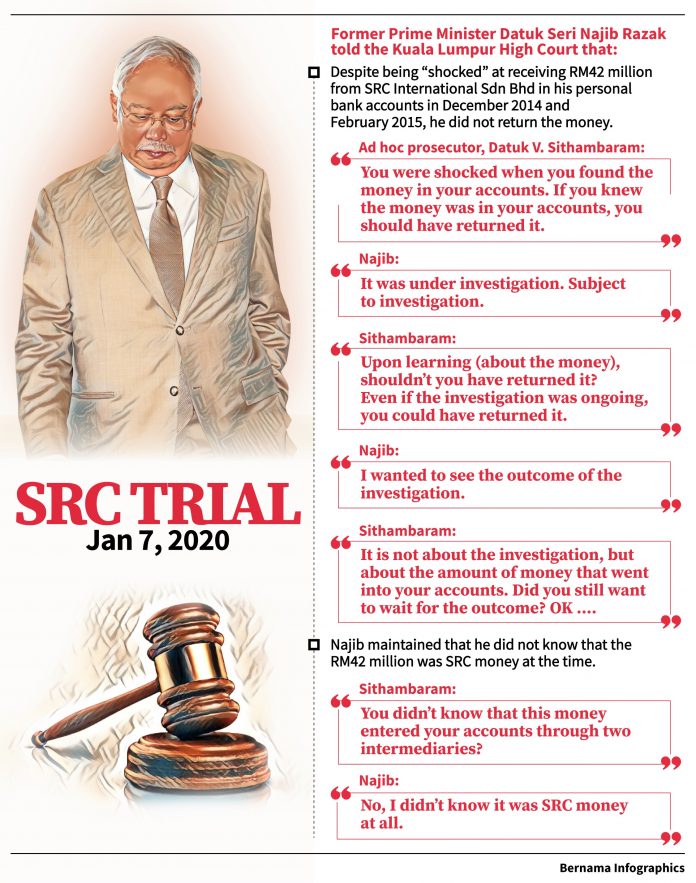 He is facing four charges of having used his positions to obtain gratification totalling RM2.3 billion in 1MDB funds and 21 counts of money laundering involving the same money.

The court also set the entire month of June, July, August, September and October including Fridays for the 1MDB trial.

“However, the proceedings on Friday will start in the morning until 12.30 noon,” said Justice Sequerah when the case came up for case management before him yesterday.

As for the Jan 13 to 16 dates that had previously been fixed for the trial, Justice Sequerah said he decided to vacate these for Najib’s 1MDB audit tampering report trial, following his discussions with High Court judge Mohamed Zaini Mazlan, who is presiding over the case.

Rahmat informed the court that the new dates could clash with lead defence counsel Tan Sri Muhammad Shafee Abdullah’s other ongoing cases such as the Cradle Fund CEO murder trial at the Shah Alam High Court that is set to resume in May.

He also informed the court that the Cradle Fund CEO murder trial was fixed earlier in December last year.

Justice Sequerah asked the defence to write to the respective High Court judges requesting for their trial dates to be vacated to give Najib’s main 1MDB trial precedence.

He faces imprisonment of up to 20 years and a fine of up to five times the sum or value of the gratification or RM10,000, whichever is higher if found guilty.

For the 21 money laundering charges, Najib was alleged to have committed the offences at the same bank between March 22, 2013 and Aug 30, 2013. All the charges were made according to Section 4(1)(a) of the Anti-Money Laundering and Anti-Terrorism Financing Act (AMLATFA), which carries a maximum fine of RM5 million and a jail term of five years, or both on conviction. – Bernama