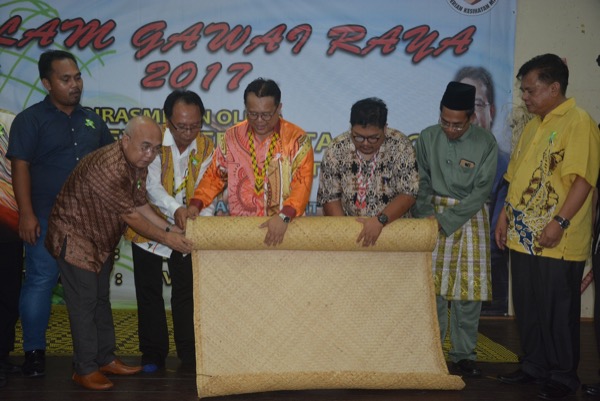 Nanta thanks services of medical officers in Kapit

“I salute those who volunteer to work here for longer period. I have known the medical officers in the past who volunteered to serve in Kapit for a longer period of time. One of them was Dr Hashim Foda a general surgeon from Cairo, Egypt who had served here for seven years. He (Hashim) told me he would like to stay here to work but because of the long bureaucratic process  he left before the permit arrived.

“Now, he is in Kuala Lumpur securing a better job. A former Kapit Division Health Officer Dr Peter Lee when he was here,

travelled through the length and width around Kapit Division and so was also Dr Kristnan. They were very dedicated Health workers who devoted their services to provide healthcare to the locals,” said Nanta while officiating at ‘Malam Gawai Raya 2017’ hosted by Kapit Division Health Department held at Multi-purpose hall Sri Baleh VIP Guesthouse here recently.

“On the other hand, I feel sad that there were many medical officers who just came here to fulfil the requirement by the Ministry of Health (MOH) and applied out once they get it. I have come across many cases in the past. They met the requirement and left soonest possible,” he pointed out.

Commenting on the ‘Malam Gawai Raya 2017, Nanta lauded the department (Kapit Division Health Department) for observing multiracial and religious society. He said although we come from different ethnic and religious background we are together to attend function to establish close relationship.

At the function, Nanta announced a government grant of RM10,000 to Kapit Division Health Department for its social activity.

On the matter raised up by the Kapit Division Health Officer Dr Hamidi Sarkawi, Nanta assured that he would raise the matter to the attention of the relevant authority.

Earlier Dr Hamidi pointed up that Kapit Division being the same size of Pahang was only served by a handful of medical officers, namely two at Sungai Asap Clinic, three at Belaga Clinic, two at Song Clinic, seven at Kapit Health Clinic and two at Kapit Division Medical Department.

He hoped more medical officers could be sent to serve in Kapit because here the cases of vector-borne and transmitted diseases like malaria, tuberculosis, are still quite high. He affirmed the aim to strike for quality healthcare services to Kapit folks.