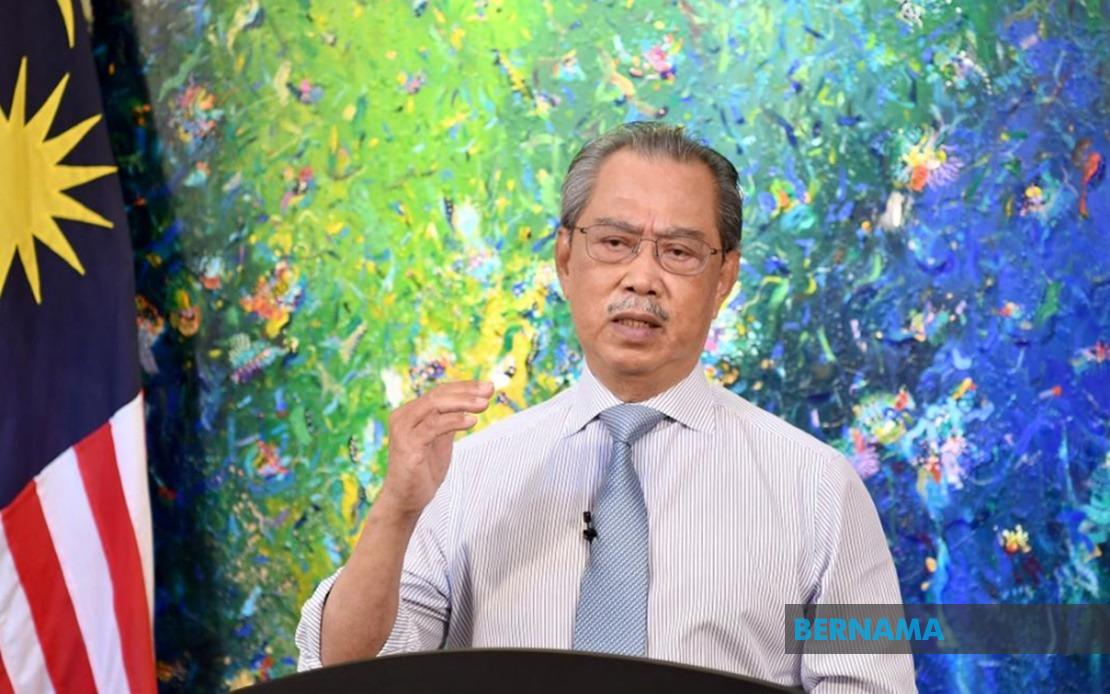 KUALA LUMPUR: Prime Minister Tan Sri Muhyiddin Yassin today unveiled the National Recovery Plan which is believed capable of bringing life back to normal by the end of this year, including reconvening parliament in September or October.

He said the plan, which is a strategy to transition out of the Covid-19 crisis, covers four phases and transition of the movement control order (MCO) phases in stages.

Each phase will be based on the data from three threshold indicators to move from one phase to the next, he said when announcing the plan over television this afternoon.

Muhyiddin said the first phase (in June) began with the total lockdown, which is being implemented when the number of new cases is spiking, the public health system is at a critical level and the vaccination rate is low.

He said the government will consider the transition into the second phase (July-Aug) after the average daily tally drops to below 4,000 cases, the public health system is no longer critical, bed occupancy rate returns to a moderate level, and 10 per cent of the population are fully vaccinated.

Under the second phase, economic activities will be opened in stages by allowing workers’ attendance of up to 80 per cent capacity of the premises, he said.

The prime minister said the government will continue taking the positive-list approach with only the listed sectors will be allowed to operate, while the others will remain closed.

He said, at the same time, sectors in the positive list from the first phase will also be expanded in the second phase with more sectors to be included, while social activities and interstate travel will remain disallowed.

Muhyiddin said activities allowed under the second phase would include manufacturing such as the production of cement to ensure continuity of permitted construction and retail trade such as the sale of electronic goods and computers to support those working from home.

However, he said, some manufacturing, construction, retail and service activities would remain unlisted and not operate, such as textile manufacturing and furniture outlets.

For the third phase (September – October), the Prime Minister said all economic activities would be allowed to operate except those posing high risk of Covid-19 infection.

He said this phase could be activated if Malaysia reached the threshold value of less than 2,000 Covid-19 cases per day, the public health system was at a manageable level with bed occupancy rate in the ICU at an adequate level and 40 per cent of the country’s population had received the second dose of the vaccine.

The threshold value is expected to be reached by the end of August at the earliest, he said.

In the third phase, all economic sectors would be allowed to operate except activities on the negative list, i.e., activities that are at high risk of Covid-19 infection or involve large groups of people.

The economic sector would be allowed to operate at 80 per cent capacity as in the second phase and social activities such as education and certain sports could be allowed in stages, he said.

Muhyiddin said that also under the third phase, all manufacturing activities would be allowed to operate subject to standard operating procedures (SOPs) and capacity limits.

Activities on the negative list not allowed refer to high-risk activities because they involve large groups of people such as conventions and where physical distancing would be impossible to enforce such as pubs, spas and beauty salons.

Nevertheless, the prime minister said relaxation of the capacity limits would be considered to allow companies to operate fully after their workers have been vaccinated.

Muhyiddin also expressed commitment to reconvening parliament in the third phase, probably in September or October, subject to strict SOPs.

“This has been my stance from the beginning that the parliamentary democracy system can function again when the time is right, that is when the Covid-19 cases are under control and we almost achieve herd immunity.

“I will continue to uphold the principle of parliamentary democracy and constitutional monarchy,” he said.

The prime minister also warned against creating unrest and confusion among the public to the extent of disrupting the government’s efforts to handle the pandemic.

He said the country could move into the fourth phase if the threshold value dropped to below 500 cases, the public health system is at a safe level, bed occupancy rate in ICU at an adequate level, and 60 per cent of the population had received both doses of the vaccine.

Based on the projection of the National Covid-19 Immunisation Programme (PICK), the transition could be implemented by the end of October, at the earliest.

Muhyiddin said the fourth phase is “where we can return to normalcy our daily life”.

He said this entails the opening of all economic sectors whole more social activities will be allowed, the same with interstate travels and domestic tourism but subject to strict SOPs.

This phase can only be implemented once Covid-19 cases are low, the public health system is at a safe level and herd immunity is achieved latest by the end of this year, he said.

“This plan was drawn up taking into account every possible consideration to ensure the decisions made will safeguard the lives and livelihoods of all of us,” he said.

The prime minister said the increase in the supply of 16 million doses of vaccines by the end of July as well as the ramping up of the daily vaccination rate, have given the government the confidence to embark on this recovery plan.

All SOPs under these phases will be detailed out by the National Security Council (MKN) and announced in the near future, he added. – Bernama

Economic activities to allow up to 80 pct staff on premises if daily Covid cases drop below 4,000