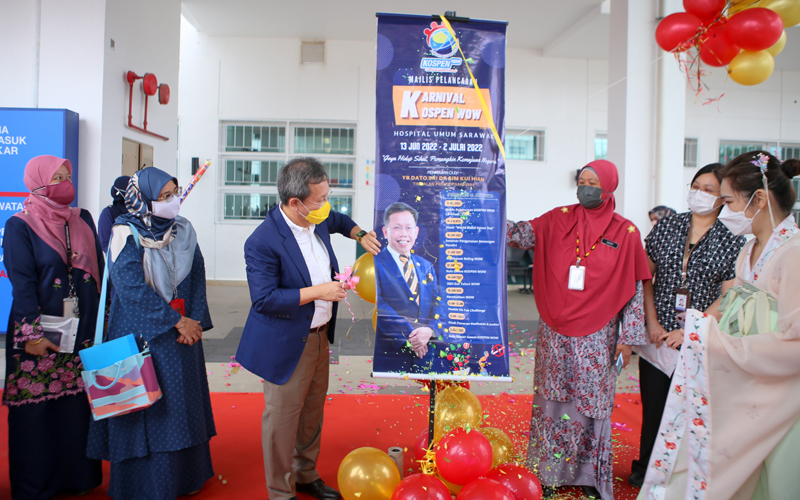 NCD – main cause of death

KUCHING: Non-communicable diseases (NCD) is the main cause of death in Malaysia, including in Sarawak.

Deputy Premier Datuk Seri Dr Sim Kui Hian said the prevalence of NCD risk factors among Malaysians was from cardiovascular disease, cancer and diabetes, which accounted for about nine million deaths among men and women under the age of 60.

“NCD is the number one disease in Sarawak, with the most common being heart attacks caused by cardiovascular disease, and the second disease is cancer,” Dr Sim said at the launch of Komuniti Sihat Pembina Negara (KOSPEN) Towards Wellness of Workers (WOW) Sarawak General Hospital 2022 Health Carnival, yesterday (June 13).

Dr Sim said studies conducted by the National Health Morbidity Survey, 2019, showed the prevalence of NCD diseases and risk factors among adult Malaysians was high where one in five Malaysians have diabetes and as high as three in 10 Malaysians have hypertension.

“Eighty per cent of deaths due to NCD occur in low and middle-income countries such as Malaysia and Sarawak is not an exception.

“In other words, NCD is the biggest cause of death for those of working age in the world, and also in Sarawak.”

He asserted that the situation was worrisome and needed to be addressed not only because of the rising cost of disease treatment, but even those with uncontrolled NCD disease could also cause their productivity to be disrupted.

“Workers are a very important asset for the productivity of a country. Disease prevention and employee health care are not just about looking after the well-being of the members themselves but are also important in creating a sustainable workforce.

“A healthy, productive and sustainable workforce can make the Malaysian economy viable and in turn can give confidence to foreign investors to invest in Malaysia to further boost the country’s economic growth,” he said.

Dr Sim also pointed out that the cost of NCD treatment was often long-lasting and would burden the employer as well as the staff themselves.

“This in turn can burden the national economy and cause the development of the country that we have achieved to decline.

“However, these costs become lower if NCD disease is detected and treated earlier or continues to be prevented from occurring.”

Dr Sim also hoped that this KOSPEN Wow programme would raise awareness of the importance of health care and a healthy lifestyle among civil servants in line with the government’s aspirations in achieving the “Agenda Nasional Malaysia Sihat” which aims to cultivate healthy living and environmental sustainability in supporting well-being.