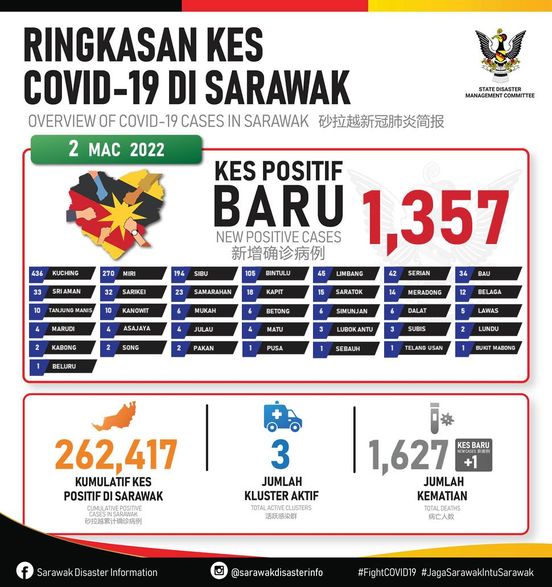 Meanwhile, Mukah, Betong, Simunjan and Dalat each had six Covid-19 cases, five in Lawas, and four cases each in Marudi, Asajaya, Julau and Matu.

The committee also mentioned Lubok Antu and Subis each had three cases, Lundu, Kabong, Song and Pakan each had two cases and one case each was recorded in Pusa, Sebauh, Telang Usan, Bukit Mabong and Beluru.

SDMC said one Covid-19 fatality was recorded, involving a 79-year-old man in Kapit on Feb 27.

The victim whose body was brought to Kapit Hospital had a medical history of  high blood pressure, diabetes and chronic obstructive lung disease.

The state also recorded a total of 10 compounds which were issued in Kuching for failing to register using the MySejahtera application at premises. This brings the total compounds to 13,477.

“There were nine new persons under surveillance and 236 are still in quarantine at designated hotels.

“To date, a total of 167,085 persons under surveillance have been discharged,” said the committee.