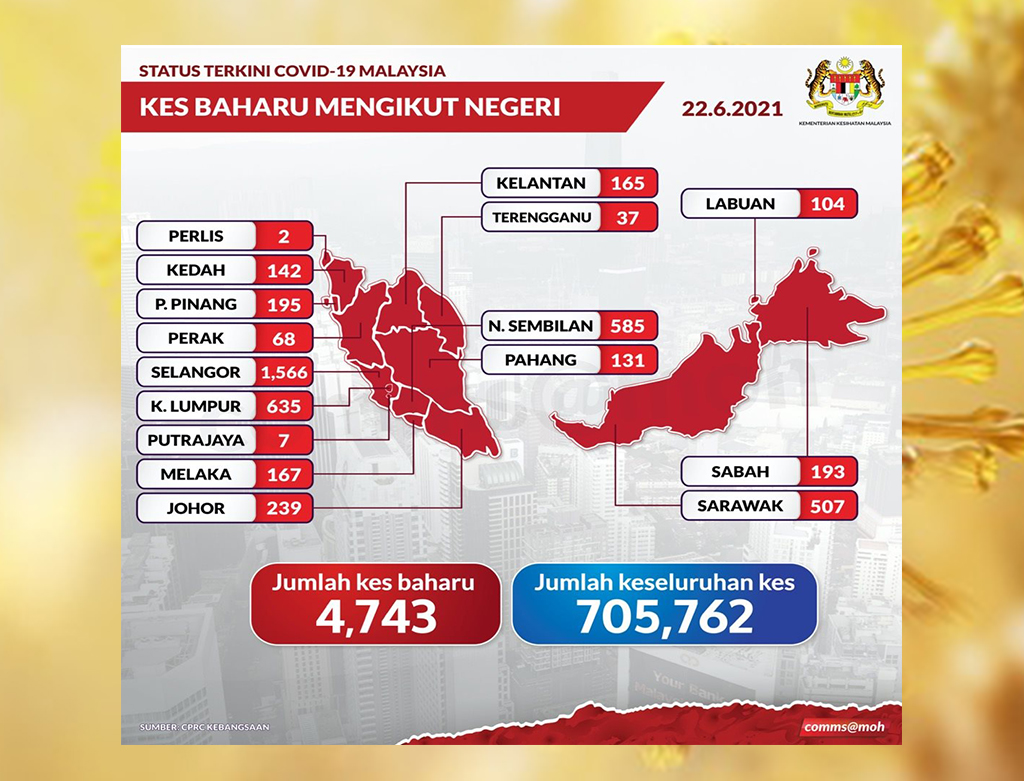 KUALA LUMPUR: New daily Covid-19 cases in the country have remained below 5,000 for two consecutive days.

Health director-general, Tan Sri Dr Noor Hisham Abdullah, via a Twitter post, said that a total of 4,743 cases were recorded today, an increase of 232 cases compared with 4,611 reported yesterday.

The latest development brings the cumulative number of Covid-19 cases in the country to 705,762.

Meanwhile, Dr Noor Hisham said in a statement that there were 5,557 recoveries in the past 24 hours, while the current number of active cases stood at 62,027.

He also said that 875 patients are being treated in the intensive care units (ICU), with 445 of them requiring respiratory assistance.

A total of 77 fatalities were recorded today, with 32 in Selangor; Negeri Sembilan (12); Johor (eight); Sarawak (seven); Kuala Lumpur (five); Melaka (four); Sabah and Labuan (three each); and Pahang, Perlis and Terengganu (one each).

The three remaining workplace clusters were in Industri Jalan Teknologi Lima and Industri Jalan Senawang Empat in Negeri Sembilan as well as in Jalan Maju Lima in Johor.

The community clusters were in Kampung Bukit Tanah, Kampung Kubang Hakim and Kampung Pulau Tukang Dollah in Kelantan as well as in Lunyim and Sungai Long Seripa in Sarawak. – Bernama