KUCHING: Sarawak wants no part of any bad culture from West Malaysia to be brought into the state.
Political analyst Datuk Peter Minos concurred with academician Dr Jayum Jawan who was quoted saying that the present ethnic and religious problems which started in the west were being imported into Sarawak.

“That is why we in Sarawak have to be on our guard and be very wary of such characters,” he said, adding that they were the real obstacles to harmonious Malaysian living.

“The authorities try to downplay and hide the problems; they simmer down but erupt every now and then. This is because the problems are there, often hidden and in hibernation until they erupt,” he stressed.

He said worse still, some Malayan politicians would make things worse such as when the Finance Minister claimed Sarawak would go bankrupt in three years’ time. 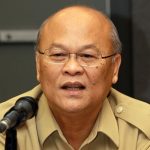 “All these, to me, shows that some politicians have no culture of respect for Sarawak and are totally insensitive thus very offensive,” he commented.

He noted that it was common for Malayan politicians to bad mouth each other and being racialists hence there was little respect for civility and sensitivity amongst them.

“Sarawak does not want these sorts of problems here, because the bad culture are impediments to out unity and harmonious living.

“It is better for us in Sarawak to ward off and stay clear. And that is the reason why we do not want peninsular-based parties to enter Sarawak and then bring the bad culture to create troubles for us,” he stressed.