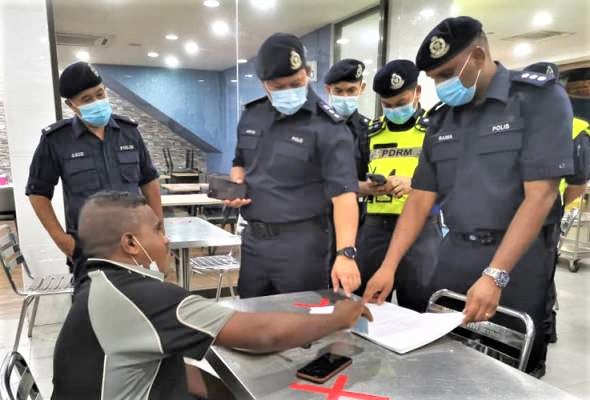 KUALA LUMPUR: Those applying for inter-state travel are reminded against giving lame excuses for the purpose, but to do so only with genuine urgent need.

Gombak district police chief ACP Arifai Tarawe said since the conditional movement control order (CMCO) was enforced four days ago (Oct 14), a total of 1,587 applications for inter-state travel were received and out of that, 1,555 applications were approved.

“Most of the applications to cross the state border are for medical, death and emergency cases. Those that were rejected gave lame excuses, such as for travel and holiday, to attend wedding reception or send children back to home town for no reason,” he added.

He told this to reporters when met after a special CMCO-compliance operation in Selayang Baru and Sri Gombak near here late yesterday, during which seven individuals were compounded and two foreigners were detained.

Last Thursday, Senior Minister (Security Cluster) Datuk Seri Ismail Sabri Yaakob said application forms for movement permits in Selangor, Kuala Lumpur and Putrajaya, which are currently under CMCO can be obtained from the nearest police station or downloaded from the official Facebook page of the Royal Malaysia Police (PDRM).

The completed form must be submitted to the nearest police station to obtain the signature of the station chief and stamped for use during roadblocks.

On Oct 12, Ismail Sabri announced the implementation of CMCO in Selangor, Kuala Lumpur and Putrajaya from Oct 14 to 27 after receiving advice from the Ministry of Health Malaysia and taking into account the increase in cases and transmission of Covid-19 such as in Klang, Petaling District and Gombak. – Bernama