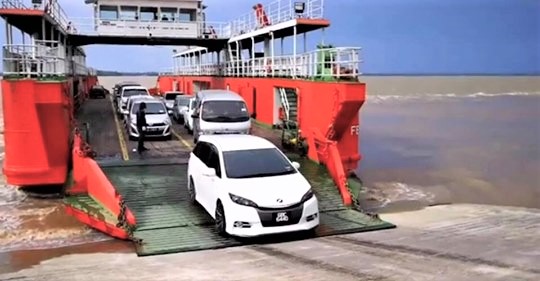 KOTA SAMARAHAN: Increased traffic flow at the Sebuyau-Triso Ferry base in Samarahan Division started yesterday and users are reminded to be patient while heading to their destinations during the festive season and school holiday.

According to a press statement by the Public Works Department (JKR), the increase in the number of vehicles started this morning.

However, the situation was under control although there was a long line of vehicles waiting to go on the ferry to cross Batang Lupar from Sebuyau in Samarahan Division to Triso in Betong Division.

“There are now three ferries crossing the river. This is one way to accommodate the increasing number of vehicles using the ferry service from May 25 to June 16 at the Sebuyau-Triso Ferry.

JKR has urged local fishermen not to install trawls close to the ferry route so as not to disturb the smooth operation of the ferries.

JKR advised users of the ferry services to always comply with the safety regulations and not cut queues. They must follow ferry crew instructions especially when vehicles enter and exit the ferry.

It said only drivers are allowed to be in vehicles. Passengers must exit all vehicles when the ferry is moving.

When a vehicle is in the ferry, its engine should be turned off and the hand brake pulled tight.

Users are advised to always be aware of the location of emergency aids such as jackets, buoys and safety rafts.

Getting more youth to own franchises