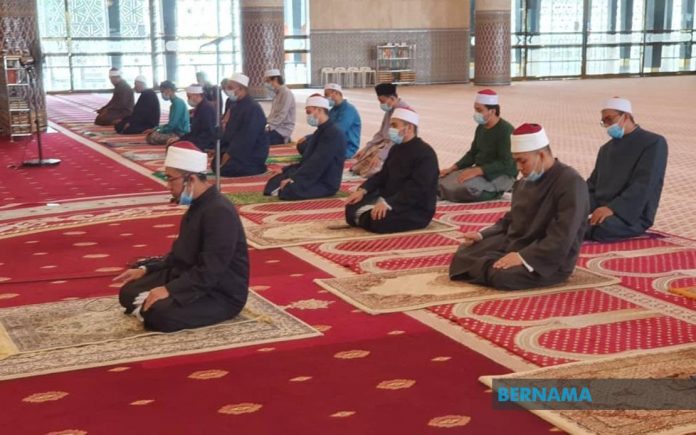 KUALA LUMPUR: The Federal Territories Islamic Religious Department (JAWI) has informed that Friday prayers and congregational prayers performed in mosques, Friday surau, and selected surau in Covid-19 green zones in the Federal Territories will involve only mosque officials and staff, as well as certain others determined by the mosque administration.

Minister in the Prime Minister’s Department (Religious Affairs) Senator Datuk Dr Zulkifli Mohamad Al-Bakri said the number of people in the Friday prayers cannot exceed 30 and not be less than three.

“JAWI has informed me that Friday prayers and congregational prayers in mosques, Friday surau and selected surau in these green zones will only involve the chairman, committee members, officials and staffers.

“The congregation will be determined by the mosque or surau committee and will only be upon invitation,” he said in a statement on his Facebook account today.

He said JAWI will provide the list of mosques, Friday surau and selected surau in the green zones while the guidelines for implementation can be found on JAWI’s Facebook account.

He added that he was happy to see mosques, Friday surau and selected surau in green zones in the Federal Territories ready to receive the congregation for Friday prayers today.

Meanwhile, director-general of the Department of Islamic Development Malaysia (Jakim) Datuk Paimuzi Yahya said in the case of mosques under Jakim, only the National Mosque which is in the green zone will hold Friday prayers, congregational prayers, Tarawih prayers and Aidilfitri prayers beginning today.

He said two other mosques under Jakim, namely Masjid Putra and Masjid Tuanku Mizan Zainal Abidin in Putrajaya are still in the yellow zone.

“The congregational prayers are limited to not less than three people and not more than 30, comprising mosque officials and staff, as well as others who are determined by the mosque administration,” he said in a statement.

He advised the public to refer to the mosque administration and said they are not allowed to perform congregational prayers or other activities without permission.

“This is to avoid congregations which are beyond the control of the mosque which may affect social distancing. Let us pray that the country be freed of Covid-19 and mosque activities can resume as before,” he said.

He said congregational prayers in the mosques will be subject to all the conditions in the guidelines provided. – Bernama

SOP for churches, other religious bodies