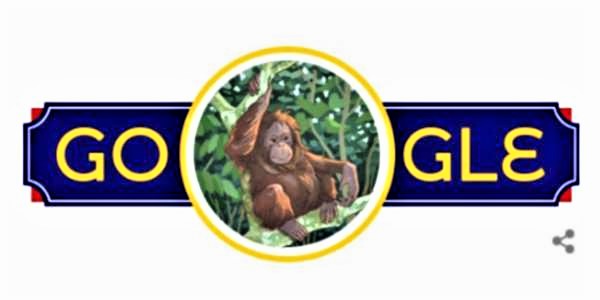 The species are found in the rainforests of Borneo, particularly in the states of Sabah and Sarawak, as well as Sumatra.

It is the second animal chosen by the search engine, which for the past 20 years, crafted special doodles to celebrate special occasions all over the world.

As for Malaysia, the search engine had used a few doodles to mark the past Merdeka Day, including the Malayan tigers, teh tarik and ‘wau bulan’, an intricately designed Malaysian moon-kite.

But most of the times, the national flower ‘bunga raya’ (hibiscus) was featured.

Aug 31 is the official Independence Day of Malaysia. It marks the Federation of Malaya’s Declaration of Independence and sovereignty from the British rule on Aug 31, 1957.

The federation of Malaya merged with Singapore, North Borneo (Sabah) and Sarawak to form Malaysia on Sept 16, 1963. However, on Aug 9, 1965, Singapore separated from Malaysia to become an independent state. – Bernama