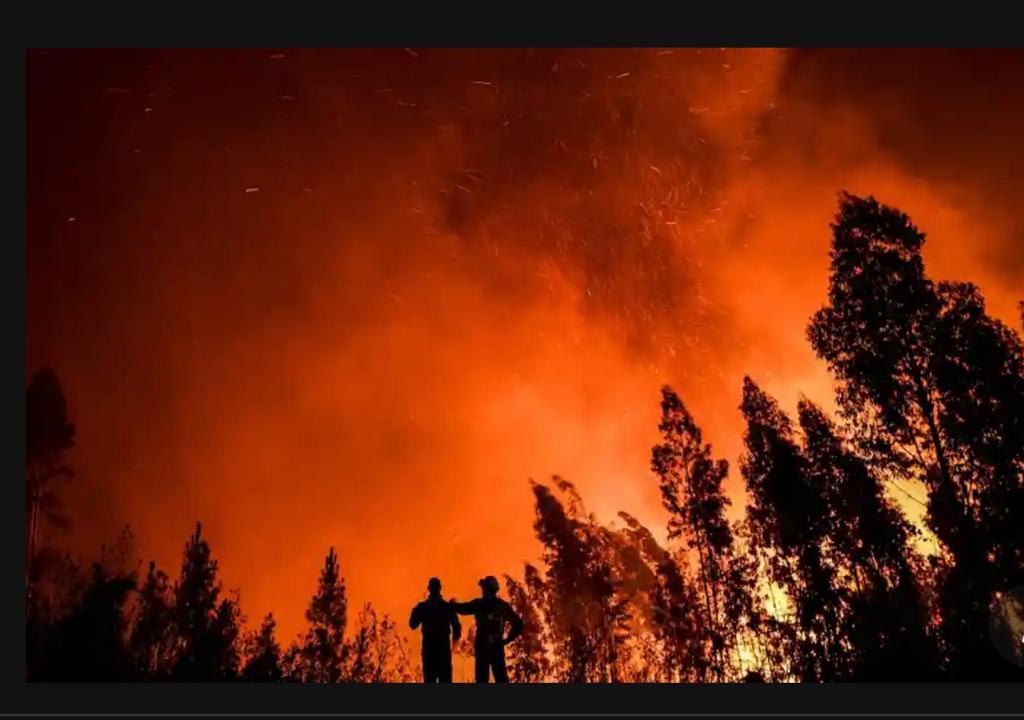 AS a precursor to the ominous times to come, Bloomberg News, filed a report last July 14 entitled ‘China’s Heatwave Turns Deadly as Industrial Power Cuts Begin’. The headline gave me an idea to write about.

Things are heating up around us, metaphorically and physically and the news report was the catalyst I needed to start cracking. And to get a feel of the dire situation, and the sense of urgency to provoke me to get going, a sample of the write-up is quoted below.

IT THEN CONTINUES AS FOLLOWS:

Wow, such high temperatures are affecting hundreds of millions of people. As global warming marches, we will get more and more reports of abnormally high temperatures around the world, pushing the boundaries of what forecasters were used to seeing or planning for.

China is not alone in facing extreme weather this summer. Blistering heat waves have been reported in Texas, where the power grids are under extreme strain with the risk of blackouts being elevated as people turn on their air-conditioners. In Portugal they were fighting a forest fire and protecting homes from several wildfires across the country.

In his poem entitled ‘The Divine Comedy’, Dante describes the gateway to hell which has the following words emblazoned on it: “Abandon hope, all ye who enter here.” Indeed, an ominous and solemn warning for those who are unfortunate enough to find themselves standing there, in front of that most ominous of gates.

For our readers not in the know, ‘The Divine Comedy’ is an Italian narrative poem by Dante Alighieri, which is widely considered the pre-eminent work in Italian literature and one of the greatest works of world literature. Dante Alighieri has been called ‘the father of the Italian language’. He was the ‘Sifu of all Sifus’ for the Italians. La Commedia or La Divina Commedia, the name given to his most important work posthumously, is not only the most significant work of Italian literature but also indispensable to world literature. It brought him lasting fame and the title “Father of the Italian Language”.

In particular, Dante, in the 14th century, did for the Italian language what William Shakespeare, the English playwright, poet and actor, did for the English language, in the 17th century. He did not write The Divine Comedy in Latin, as was customary at the time, but in the Italian vernacular, more precisely in the Tuscan dialect, thus establishing it as a written language in literature.

Dante came before Shakespeare, so he can claim his place as the first of the master poets, writers and storytellers. Shakespeare, centuries later, emerged and was later widely regarded as the greatest writer in the English language and the world’s greatest dramatist.

This post asks the question, taking the liberty to use Dante’s portrayal of hell, as a figurative reference to one of the ominous challenges of our time, namely, whether we are, literally or figuratively, on the verge of a Dantean existence, or in the layman’s term, now at hell’s gate as described by Dante, as we observe our planet Earth falling headlong on a fast track slide into an impending hellish and bizarre existence as a result of an increasingly warming planet. Warming is a mild term where heating up would be more appropriate. Or as the title to this article says, it’s more of a ‘Burning Earth’ that we are seeing emerging.

Evidence in this regard comes from actual data and temperature readings which show the occurrence of startling heatwaves at both of Earth’s poles and causing alarm among climate scientists, who are warning of these “unprecedented” events which could signal faster and abrupt climate breakdown.

As we know, when it is summer in the northern hemisphere, it is wintertime in the southern half, and vice-versa. To those who have the money, they can afford to fly to where the temperature suits them and could afford to live there to take advantage of the seasons. But of late, it has been reported that temperatures in both hemispheres have shown astonishing above-normal temperatures. For example, the temperatures in Antarctica, the South Pole, have reached record levels at an astonishing 40C above normal in places. So it was reported in a recent report I read in The Guardian. Imagine, while it’s above 40C temperatures in Antarctica — a place of snow and ice all the year round — the South Pole is warming up like crazy.

It was reported that at the Vostok station, about 800 miles from the geographic South Pole, he temperature was a massive 15C hotter than the previous record, while at Terra Nova coastal base the water hovered above freezing, unheard of for that time of year. Water temperature at above freezing would mean melting of the ice, I would imagine.

At the same time, it was noted that weather stations near the North Pole, which is getting warmer and showing signs of melting, indicate 30C above normal, hitting levels which are normally attained far later in the year. The warm temperature is not only higher but also occurs faster. It has been observed that both the North and South poles have seen record temperatures in March.

But that is not all. Whilst the South Pole is seeing abnormal high temperatures, the North Pole is seeing similarly unusual temperatures, something that is astonishing for the time of year when the Arctic should be slowly emerging from its winter deep freeze. Based on the report, researchers said that the North Pole region was more than 3C warmer than its long-term average. So both the poles are warming up — an aberration and an unnatural phenomenon.

It’s logical to deduce that to have a heatwave at one pole may be regarded as a warning but to have heatwaves at both poles at the same time is highly irregular and hence alarming. Both the poles, the coldest regions of the earth, are warming up at the same time. It is an unequivocal sign that something ominous is happening, something like the onset and impending advent of a global climate catastrophe. Hence, the metaphorical and allegorical reference to something Dantesque in this write-up.

Will the increasing intensity of heatwaves and changes to land use patterns spark more and more wildfires resulting in more and larger parts of the globe being scorched in the coming decades? Will uncontrollable fires become the norm and lead to spikes in unhealthy smoke pollution and other problems that no government is prepared to deal with? Will such a scenario affect millions who are ill-prepared to confront it and result in the most vulnerable majority of humanity, who are poor and without proper housing and decent dwellings, being forced into a Dantean existence?

Talking of Dantean existence, Dante’s portrayal of purgatory and paradise is no doubt fictional and metaphorical and not, as some may wrongly assume, a description of the real and fixed image of what those places are like. How could it be, unless he has been there himself and seen them with his own eyes? He was just imagining the scenes and putting them into writing, or what was later classified as high literature in the West.

Given that Dante’s portrayals are allegorical and metaphorical, they can be adopted as a portrayal of the nature of difficulties and hardships that we may encounter as a result of the wildfires, the fast-rising temperatures, the frequent cycle of flooding and droughts, and the destruction of forest cover and the desertification of the environment following the destruction of the environment, and so on, that can follow a global climate breakdown. Dante’s images can help to bring home the message of the need for urgency and appreciation of the gravity of the message that the world is in the throes of an existential challenge it has not quite seen before.

In a world as what has just been painted in this posting, one having a hellish or bizarre quality where we are like refugees who have left the safety and comfort of their homes and are forced to live a Dantean existence attributable to the phenomenon of global warming, and where relief and salvation seem to be nowhere in sight. Like a refugee, whose predicament is such a huge problem, well beyond his individual ability to overcome, the rapidly warming up of the world is something the world has not been prepared for.

It is not for the lack of knowledge or understanding, or the absence of the urgent “voices in the wilderness” but for the sheer apathy, carelessness and total breakdown of global leadership that has led the world to this precipice. The current value system being espoused by the world, or taken as the norm, is not taking it anywhere better but instead is pulling everyone, everywhere into the abyss and imminent inferno. Hell on earth.

Perhaps, the root cause of this emerging catastrophe of an inferno on earth has already been given by Dante himself and mentioned in his epic poem, The Divine Comedy. These seven deadly sins, also known as the capital vices or cardinal sins, are a grouping and classification of vices within Christian teachings. Although not directly mentioned in the Bible, there are parallels with the seven things God is said to hate in the Book of Proverbs. According to the standard list, the deadly sins are pride, greed, wrath, envy, lust, gluttony and sloth. The list of which I now recall rather clearly as something put in a poster depicting an illustration of the seven deadly sins posted on the walls of our longhouse, often bringing terror to us kids as there was a drawing of the devil in his red underwear. Kind of brings to mind some superheroes I saw later in life who were always clad in red underwear.

Hence, the rationale and justification of using the allegory of an impending headlong fall into a Dantean existence, as hinted at in the title of this posting, is an indictment of the world’s collective failure in succumbing to the seven mortal sins which are reaping their rewards in the here and now.
All behaviours or habits are classified under this category if they directly give rise to other immoralities. What a powerful reminder from Dante made more explicit in the current and fast-evolving times. That the world is caught in flagrante delicto, and guilty of, committing all the seven deadly sins mentioned by Dante would invite instant retribution and exact poetic justice is not surprising.